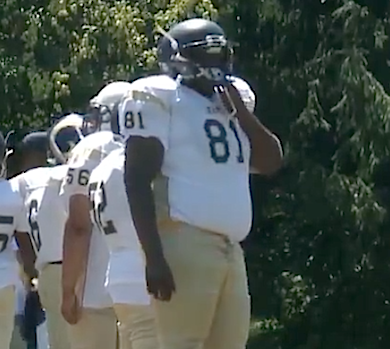 The Bret Cooper Junior All-American Selection Committee has, again, dipped into the bountiful harvest which is the Commonwealth of Kentucky’s Class of 2022, to identify another Kentucky grid iron star as worthy of consideration going forward for its game which will be played this December in Dallas, Texas. The game which pits East versus West every year in Dallas, Texas at Lancaster High School is 9 years old and has helped propel nearly 80 players, as of 2016, into full scholarships to FBS, Power 5 Conference Universities.

The game has boasted such former Junior All-Americans as Christian Kirk, Texas A&M; CJ Sanders, Notre Dame; Tate Martell, The Ohio State University; Erik Swenson, Oklahoma; Shane Simmons, Penn. State; Armani Hooker, Iowa; Sacha Killeya-Jones, (playing basketball) Kentucky; Koy Detmer, BYU; Brian Dawkins, Jr., Clemson; and Tobias Little, Louisville.The Bret Cooper Junior All-American Game is one of the more prestigious All-American games and the only one which factors in a student’s academic standing and ability into its selections. Bret Cooper, in regard to Goodwin’s entry on the official Watch List told me the following:  We are excited about Kiyaunta Goodwin’s stature, frame, athleticism, scholarship and, most importantly, character and work ethic both in and out of the classroom. Representing the selection committee for the Junior All-American Game, we hove no reason to wonder why Power 5 Conference programs the likes of Louisville, Kentucky, and Georgia would go ahead and pull the trigger by offering this outstanding edge protector and pancake machine even though he is only 13 years old. We have made note of his selection to the Under Armor Next Game as well as his outstanding play on both Team Kentucky FBU and Team Kentucky Future Stars. We feel we have another opportunity to, just like last year, strike gold in the Commonwealth of Kentucky mining the incredible talent, at this level, the Bluegrass State boasts.

Kiyaunta Goodwin has been placed on the committee’s official watch list:

Kiyaunta is a 6’6″ 350 pound monster who regularly trains with Chris Vaughn at the prestigious Aspirations Fitness Center. One of the first things one notices about Kiyaunta is his firm hand shake and forthright way in which he looks one right in the eye. Kiyaunta has been nicknamed Syrup by opponents and teammates alike owing to his averaging over 8 pancake blocks per game. Kiyaunta, though only 13, has a wingspan in excess of his 6’6″ height and moves his feet very well, making him in-succeptible to being flanked by upfield edge rush. It’s just about impossible to run around length like his especially with his being so strong and quick to go along with the length. Kiyaunta is Kentucky’s top OL prospect in the 2022 class according to Kentucky Prep Gridiron.

Bret Cooper, when specifically asked about Goodwin’s inclusion on the watch list for his annual game said…Goodwin, in both his playing ability, academic standing, and character represents the very best in Middle School athletic prowess, academic performance, and exemplary citizenship. Kiyaunta Goodwin is the type of player for whom our game was created. We had two fine players last year from Kentucky who we feel represented us very well in Austin Gough from Owensboro and The JJ Watt Award winner, William Long from Hopkinsville. Our strong belief is Kiyaunta Goodwin will expand the reputation for excellence established by the former Junior All-Americans who have played previously should he eventually gain selection.

Kiyaunta has been offered by Georgia, Kentucky, Louisville and the Western Kentucky University to play football at each of their institutions already, though only 13 years old. This is Fletcher Long reporting for Kentucky Prep Gridiron reminding you to PLAY THROUGH THE WHISTLE!