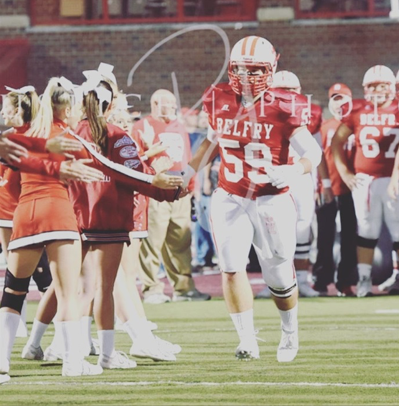 We have talked many times on KPGFootball about the concept of being a football player. Football players can play the game, regardless of their height, weight, speed, quickness, explosion, power, just regardless. These are the guys who, often, don’t litter the pre or post-season watch lists of the All-(fill in the blank) squads which pop up around the Bluegrass yearly. These are glue guys, the kind of guys who make every team for whom they play better for them having been on the roster. They are the guys around whom the team rallies. They contribute to the statistics in ways the statistician doesn’t always capture. Whether they lead the team in any particular statistic is immaterial because their donning the uniform means marks in the left-hand column of the won-loss ledger.

The preseason, No. 2 ranked, Belfry Pirates would tell you they have one of these guys. His name is Austin Fields. Fields is 5-9 and weighs 210 pounds. There are no power numbers for Austin, on record anywhere, there are no speed numbers for Austin. What he lifts or what he runs and jumps is a mystery to us here at KPGFootball. He doesn’t win awards, make All-Star or All-State rosters; all he does is play football and lead the team. As a sophomore, in 2016, Fields, a 2019 prospect, collected 94 tackles to lead the Pirate defense which helped propel the Pirates to a 14-1 record and a 3A State Football Championship. In 2017, Fields again led the Pirate stop squad with 112 tackles. We may not know exactly how fast Fields is, but he is fast enough to catch ball carriers it would appear. We may not know exactly how powerful or explosive Fields is, but he is powerful and explosive enough to get the ball carriers he catches to the ground.

Well, the tide may be finally turning for the best middle linebacker in the Mountains as Fields has been name to the 15thRegionZone.com‘s preseason watch list for the Defensive Player of the Year. His being listed to be watched came just after his complete omission from Josh Moore’s list of Kentucky’s best High School players in 2018… Should any of the Mountain fans wish to discuss Mr. Fields’ omission with my learned colleague, his email address is jmoore@herald-leader.com. Reach out, I am sure he would love to hear from you. Not to pick on Josh, because his listing of the 50 best football players was not of his own creation. The Herald-Leader mailed out a questionnaire to football coaches across the Commonwealth, some of whom responded, most of whom didn’t. The names of the coaches who responded appear with the story, above linked.

Well, we want the Mountain folks to know that more than just the 15thRegionZone.com will be watching Austin Fields’ play in 2018. KPGFootball will also be monitoring Fields’ play and prepared to trumpet his achievements from the figurative mountain top. It’s a new ball game in sports reporting in the Commonwealth of Kentucky when it comes to football, ladies and gentlemen. We intend to give Kentucky readers the real straight-skinny on the best football players in Kentucky. Fear not, Mountain men, #WeGotUCovered!