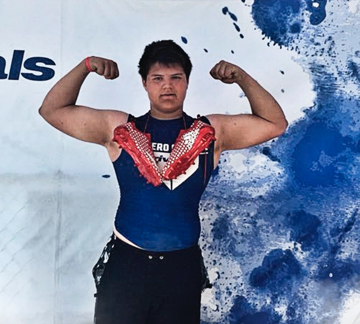 There is a joke I love telling, and which I have related to life circumstances many times. It is a story about two associates whom are going out one morning on a bear hunt. Upon picking up his associate for the morning’s hunt, the driver looks at his passenger and says, I can’t help but notice you are wearing tennis shoes. May I ask you why? The guy entering the car looks and replies, so I can run fast. The driver says you can’t out run a bear, you idiot! To which the one in the tennis shoes responds, I don’t have to outrun the bear. I love that story and it brings up a very good point. For the purposes of this article, it makes the humorous point that Anthony Johns who, were I christening him with a nickname, would be called Big Bear. Like a real bear, Johns isn’t just a brute, but able to move and move very well.

Johns hopes to either start or play as a freshman at Lexington Christian Academy. That may be a tall order for any freshman at a school coming off an 11-2 year, in Kentucky’s 2A Classification, which lost in the Regional Finals to the eventual State Champion and which only graduated 9 seniors from off last year’s roster, only 3 of which played on either side of the line of scrimmage. Of course, not every program can boast of a 6-1 235 pound, young Big Bear, running the 40 yard dash in 5.5 seconds, the pro-agility shuttle in 5.0 seconds, and already squatting 305 pounds, benching 190, and dead lifting 285. As for the legitimacy of his running speed and spacial quickness, the 235 pound Big Bear broad jumps 90 inches (7’6″). We call that, in football circles, hip explosion.

Big Bear has just started lifting weights and has been subsisting on a steady diet of natural weight push-ups and sit-ups until his present stage of physical development. To give Johns some guidance, I would wager to play along the front for LCA, with the level of competition it faces, he will need to get his bench up to 250 pounds, and both his squat and deadlift to 405 pounds or more by the Fall. With an active and consistent strength & conditioning regimen, all of those levels are easily in reach. With those strength numbers, together with his speed and agility, both of which are really good for his level of development and at his position grouping even for high school, varsity, football; we at KPGFootball could easily see him in the varsity lineup day 1, snap 1.

We are looking forward to watching Anthony Big Bear Johns this summer in the Tennessee-Kentucky Future Stars Classic help lead Team Kentucky to another victory. By the way, spread that nickname around; I believe the more you watch the kid play, the more apt the nickname will appear and the more it will grow on football fans around the Commonwealth.