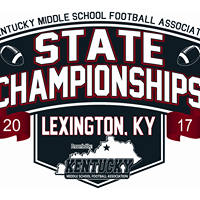 At the beginning of the year we here at Kentucky Prep Gridiron selected a Century Mortgage Company, All-Classification, Top 20 Poll. Johnson County’s coach reached out to me as a contributor to the poll and the one who wrote the article and gently chastised me for omitting Johnson County Middle School. His chastisement wasn’t too harsh, and was entirely appropriate, and he did think to thank me for my hard work in compiling the poll, which was the first of its kind ever attempted in the history of the Commonwealth of Kentucky. After beating North Pulaski (Ranked No. 2), 22-16, Sunday for the KYMSFA, Division I, State Middle School Football Championship, and polishing off a perfect 14-0 record, it would appear Scott Holbrook has made his point where points in football should be made, and that is on the field of play. Taking issue with his team’s omission wasn’t all he did, Holbrook also led Johnson County Middle to its 5th State Title in Middle School Football, or so our research would suggest. To Coach Holbrook and his Johnson County Eagles, I would say that, with the benefit of hindsight, I stand corrected. I would like to begin the article by saying, on behalf of all of us here at Kentucky Prep Gridiron, All Hail the Victors! We would also like to congratulate first year coach, at North Pulaski, G.J. Wooldridge and his North Pulaski team and staff on a hard fought Championship game and mighty terrific year.

In Division II, the Corbin Redhounds defeated Boyle County 26-9 behind the running game of superstar running back Treyveon Longmire, who scored a rushing TD on the afternoon from 65 yards out and then took a screen pass 24 yards for the score in the second half,  and a stingy and dominant defense. Gee, that’s some formula, the ability to run the football and play defense leading to Championships in football. Seems like I have heard that before espoused, by, I don’t know, pretty much every Coach who has ever won a Championship. When it comes to winning Titles, Corbin and its Coach, Brent Jackson, are fairly proficient, having also won State Middle School Football Championships in 2010 and 2014 prior to this year. Though it didn’t lead his team to victory, we would be remiss in not noting the tremendous efforts of Boyle County’s place kicker, Jaxon Smith, who connected during the game from 38, 27 and 51 yards on field goals. Not too shabby for a Middle Schooler, huh? We would also like to mention that the Corbin 7th grade squad won the State Championship too in 7th grade football which only has one Division, as opposed to the three Divisions which the 8th grade plays. Winning the 7th grade Championship doesn’t insure the team will come back and win in 8th grade Championship too, just ask North Pulaski. According to sources with whom we have conferred for the purpose of writing this article, the Corbin Redhounds are the first program in history to win both a 7th and 8th grade Football Championship in the same season.

In Division III, Lexington Christian Academy prevailed over Pikeville 45-8 to win the State Championship after having dismantled Meece County Middle School 54-13 the night previous in the Semi-final. LCA rolled through its Region and Semi-State opponents in a style reminiscent of the New Harlan team which won the Division III Championship just last season.

Well, it was a tremendous season and we certainly have very deserving, well coached, and accomplished Champions of whom the KYMSFA must certainly be proud. One thing you will notice, as the High School Varsities begin their KHSAA playoff runs, is that many of the programs which make deep runs and, even, win State Championships are the very same programs whose Middle School’s have done the same in the KYMSFA. At Kentucky Prep Gridiron, we don’t believe this is any coincidence.