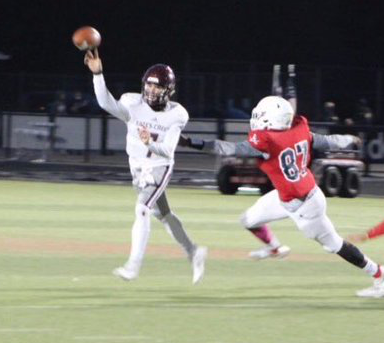 It takes some research and study to go about the commonwealth of Kentucky and identify kids who may have been playing JV a year ago but figure to cause a big splash when they hit the varsity lineup in succeeding seasons. Identification is harder with some kids than others. Today’s “Break-out” player didn’t take a genius to either find or identify.

QB Zane Patton was a senior a year ago for the Scott County Cardinals. Patton completed every pass thrown by the team in ’20, accounted for 100% of the passing yards, threw 100% of the varsity TD passes, and led the team to a 7-1 finish, bowing out of the KHSAA playoffs to semi-finalist Frederick Douglass in the 2nd-round.

He has graduated. We have searched and been unable to find any information he is reclassifying under SB-128. The same isn’t true of the player we feature today, Aaron Klein. More on that in a moment.

What are the Cardinals to do? Scott County has one of the more storied traditions in Kentucky high school football.

We are discussing a team which has won 10-regional titles, has appeared in the State Finals 5-times, has won 2-Titles, has placed 51-players on various All-State football teams, boasts 93-collegiate signees, and is a Nike Premier School.

Luckily, we’re talking about the Scott County Cardinals. Not every program can pull this off year in and year out, but Scott County can. There will be no shortages of prospects coming onto the roster to replace slots which graduation has momentarily left vacant.

We believe Aaron Klein gives the Cardinals this opportunity at the QB position. We believe Klein will win the starting job and that it is his to lose.

Klein has all the tools to run the offense every bit as well as any of the QB’s who have preceded him in the program’s long and illustrious history. Klein is a winner…and an athlete.

Klein is a 6-0, 180-pound prospect, with a strong, supple arm and quick, fast feet. He has reclassified (as we earlier alluded) into the class of ’24. Klein has been tearing it up on the camp/combine circuit and drawing rave reviews so far this summer.

Klein is a very skilled athlete with a polished athletic skill-set enabling him to play any number of places in either high school or college should the QB thing come off as expected. It is very unlikely Klein won’t align behind center in the Fall of ’21. Klein is almost certainly going to be the QB for the Cardinals immediately upcoming.

Klein runs a 4.7-second, forty-yard dash, bench-presses 265-pounds, squats 380, all while sporting a 3.5 GPA. This is a plus athlete with the intelligence and moxie to “figure it out.”

Klein’s performance in the classroom will assure his college dance card will be filled with suitors going forward. Bravo, Aaron! Bravo!