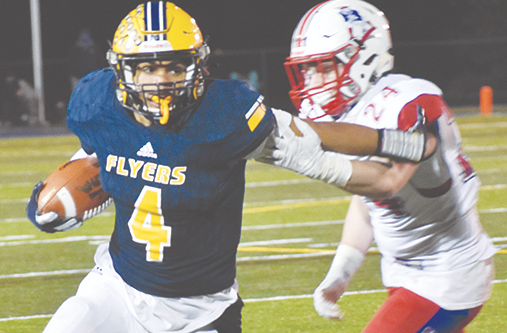 Kaden Moorman, a prospect already ranked 14th in Kentucky in the ’23 class with that ranking most assuredly about to sky-rocket with a “Power-5,” Big-10 offer, is reporting his having been offered by the Wisconsin Badgers. This is a “big pull” for this prospect and an early trigger-pull for a Badger football team which hasn’t been very active in Kentucky over the past 5 or so years.

Moorman camped at Wisconsin recently and the empirical data would suggest he had an exceptional performance while there. Moorman is a 6-2, 205-pound prospect with plus athleticism and fine speed for a prospect set to enter his junior year. We believe him to be among the first “Power-5” offers in Kentucky’s ’23 class of football prospects.

We first reported on Moorman when he was on the Team Kentucky FBU-Elite team three years ago. In that article, we interviewed his Team Kentucky Coach, G.J. Woolridge, about him and this is what he had to say about him in 2018.

“Coach Woolridge said, This team is scary good with a good chance of taking the National Championship. Desiring his elaboration on that rather general statement, Wooldridge went on to say…On offense, it looked like the Kade Moorman and Mason Lawson (Johnson County) show. Kade Moorman (Boyle County) is a grown man. When you get him running down hill behind that big offensive front, anchored up the middle with the Sayers twins (Payton and Mason, Whitesburg) and Bracken Castle (Barbourville) at center…well, you know. Let me just say this…I don’t know how we would stop it and look at our linebackers.”

Wow, how true those sentiments, about Moorman, seem today. Moorman was at Boyle County in middle school but has played his high school football at Franklin County High School, a team he just helped lead to the Class 4A title game.

Moorman displayed quite a bit of versatility in the abbreviated ’20 season. Ordinarily, a team in the Class 4A finals would get 15-games of run, as opposed to the 11 Franklin County played a year ago.

Over the 11-games, Moorman carried it 101-times from the line of scrimmage for 606-yards rushing. He carried across the goal-line 13-times while rushing and another 4-times via reception. Moorman also caught 26-passes for 453-receiving yards. Moorman led his team in scoring.

The RB/WR has run a 4.6-second, 40-yard dash, has bench pressed 250-pounds and has back squatted 315. The lifting numbers are likely old and in need of refreshing as we truthfully don’t know when they were loaded onto this prospect’s NCSA profile.

Congratulations to Kaden Moorman on this spectacular pull. He must have had a superior camp performance at Wisconsin.

His getting offered by this “Power-5” program, which is one of the Big-10’s finest, will net him many other offers coming down the line. Hey UK, UL, and WKU, we’re talking to you! Get on board before the train leaves the station.