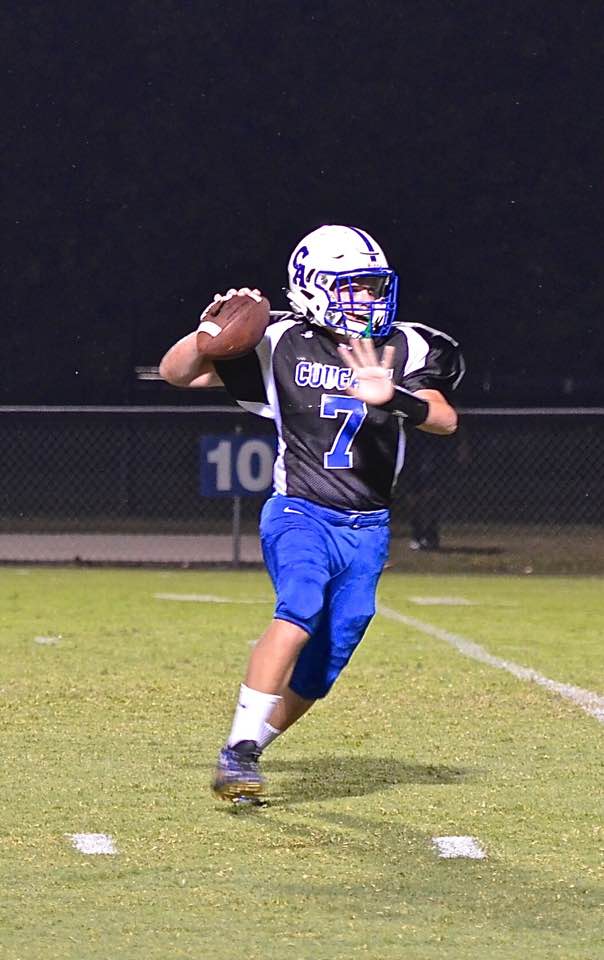 As I stated when I wrote about Kiyaunta Goodwin, the 6’6″ 342 OL from Oldham Academy in Louisville, we at Kentucky Prep Gridiron don’t usually evaluate athletes until they reach 8th grade/rising 9th.  Eighth graders report to lift with their High School Programs in the Spring of their 8th grade years, kids hit one of their major growth spurts in 8th grade, gain agility, strength, maturity, etc., all in 8th grade.  You can usually tell a 7th grader versus an 8th grader just by watching them run, their spring when they walk, and the aggression with which they play.

Occasionally, you get a 7th grader who is just too good to not report.  Now a lot of people credit big, fast, strong, athletic 7th graders with being “early developers” but I prefer to call them “committed, hard-workers.”  If 8th graders like Austin Gough, LaVell Wright, Justice Thompson and William Long, and 7th graders like Kiyaunta Goodwin and Evan Kelley are a lot better than your 7th or 8th grade sons (and I assure you they are) it’s not because they are just anatomically lucky.  The elite national and state level football players were working out, skill training or competing in combines while your sons were eating bon bons and playing X-Box.

In Evan Kelley you get a kid who has committed himself to football, works under the tutelage of QB guru and Rivals Top 100 Evaluator Jonathan Quinn (himself a former NFL QB) and throws countless balls in the offseason to keep his arm strong.  Here’s a scary proposition for you, he also graded out as high at LB, according to Tennessee Future Stars’ Coordinator Josh Jones, as at QB.

Evan can make any throw on the route tree.  He drops, sets up, and delivers the ball timely and accurately while still driving it into the receivers’ sweet spot on a frozen rope.  He works through his progressions and has coverage recognition which, frankly, makes him appear much older than he is.  It is easy to forget he’s a kid when padded up, owing to his 5’11”, 170 pound frame.  The son and grandson of two football players whom both had their jerseys retired gives him a pedigree and lineage which is beginning to manifest.

Evan ran combine times (which means the timer wasn’t cheating for him) of 5.03 in the forty, and a pro-shuttle of 4.45.  Though he can run, and with a LB’s mentality he is willing to punish a defender, he is, in Kentucky Prep Gridiron’s opinion, the top pro-style QB in the country in the 2022 class.  If he develops the build of either Wayne (grandfather) and/or Steven (father) Kelley, he could easily play either QB or LB at the next level.

On a side note, my learned colleagues at Youth1, wrote a feature article on Evan and mentioned he had a “hitch” in his mechanics.  I will take an inapposite position.  What looked to Youth1 like a hitch was that Evan, in Nashville, was throwing to receivers who were much slower than the HS varsity receivers with whom he regularly reps.  He was also throwing to receivers to whom he had never before thrown, which is a hindrance for any QB at a combine.  Frankly, the receivers repping with Kelley just weren’t where he was expecting when he set up to deliver, which made him hesitate before firing.  When he gets to camp at the Tennessee-Kentucky game, and gets practice reps with his receivers, the hitch will suddenly disappear.  Kelley’s technique is one of his strongest suits, ask Jonathan Quinn.

KPG Epilogue:  Evan Kelley was selected to play for the Tennessee Future Stars 7th grade squad as we anticipated.  What we didn’t anticipate is his being selected to play LB as opposed to QB.  In an interview over the radio with the ED of Team Tennessee, Josh Jones, we learned Evan was very much in the discussion to be selected as a QB but the staff felt he was even more of a prospect as a OLB.  We at KPG respectfully disagree but the selection process isn’t perfect and neither are we.  I suppose going forward we will look back one day and see which of us was right about what position fits this talented prospect better.  We shall see…