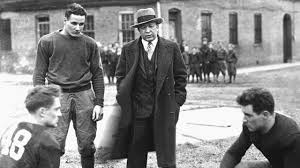 NFL Films Presents, put together a segment on the word hut. Hut is an interjection shouted by quarterbacks when initiating a play.They asked a number of NFL players and coaches their theories about the origin of hut, and then called upon a linguist to set the record straight. That linguist happened to be Ben Zimmer, language columnist for The Wall Street Journal and former language columnist for The Boston Globe and The New York Times Magazine. Ben has also worked as editor for American dictionaries at Oxford University Press and as a consultant to the Oxford English Dictionary. In addition to his regular Word Routes column, he contributes to the group weblog Language Log. He is also the chair of the New Words Committee of the American Dialect Society. During the interview with NFL films, Ben remarks finding himself…unaccountably sharing air time with the likes of Don Shula and Tom Coughlin.

We here at Kentucky Prep Gridiron are going to republish Mr. Zimmer’s excellent article partly on our site. In answer to the origin of the use of hut as a snap cadence, Mr. Zimmer wrote the following…The short answer, which I gave in the interview, is that the hut of the quarterback’s cadence (“hut 1, hut 2, hut 3…”) almost certainly comes from military cadences for marching, where hut is used to accent a syllable. The military-style hut has been in use since at least World War II, when drill sergeants also began yelling “Atten-hut!” as a call to attention. By the 1950s, quarterbacks had borrowed this technique to develop their own cadences for calling the snap count. Hut is a short, sharp syllable that can be heard clearly over a distance, so it serves the quarterback just as well as a drill sergeant leading a march.

The long answer actually goes back deep into the pre-football era. For centuries, monosyllables like hip, hup, and hep have been used as interjections to draw attention, particularly for animals. Coachmen called out these words for goading horses, and herders used them for steering their flocks. Hup has been recorded in this usage since the 18th century, and hut from the 19th century. Then in the early 20th century, drill sergeants’ rhythmic cadences for marching began to take the form of “hip/hup/hep 2, 3, 4.” (I’ve found military examples of hup from 1919, hip from 1923, and hep from 1928.) As hut (and “atten-hut”) became popularized in World War II, the military bark got taken up by drillmasters for marching bands, drum corps, and pep squads. For instance, a 1941 guide to marching band drills reads, “Some substitute ‘Hup!’ or ‘Hut!’ for ‘one,’ to gain accent.”

The sport of football, meanwhile, was developing its own interjections. Back in the 1890s, John Heisman — of Heisman Trophy fame — introduced the word hike to football. Originally, the center (who puts the ball into play) used one hand to flip the ball under his legs to the quarterback. To alert the center that he was ready to start, a quarterback would use a touch signal, often scratching the center’s leg. When playing as a center for the University of Pennsylvania team in 1890-91, Heisman got tricked by an opposing player who scratched his leg. He flipped the ball back, and the quarterback missed the pass. Heisman’s solution was to have the quarterback use the word hike to put the ball into motion so that everyone was clear when the play started. Hike was a good choice, since it can mean “to pull or raise with a sudden motion,” and that’s what the center does with the ball.

Soon after, as a coach, Heisman introduced the “direct snap,” where the ball is “hiked” in the now-familiar way. Previously, the ball would be rolled back along the ground or snapped end over end (a “snapback”). In 1893, when Heisman was the coach at Buchtel College (now the University of Akron), he had a very tall quarterback who had trouble with the ball being rolled to him. So Heisman invented the direct snap to allow the center to toss the ball directly up to the quarterback. Every other college team followed Heisman’s lead.

The signal calling of quarterbacks then got more and more complex. By the 1920s, “shift formations” had developed, most famously Knute Rockne’s “Notre Dame shift.” The quarterback would call the signal and then say hip to indicate that the offensive line should shift to new positions on the line of scrimmage. The whole backfield would move when hip was called. The hip of the Notre Dame quarterback (“1, 2, 3, hip!”) had a clear kinship with the military marching cadences of the time (“hip 2, 3, 4”), but for onlookers the shift also evoked the hippity-hop of jumping frogs. Various rule changes were enacted to slow down the shift, and the constant motion punctuated by hip became more subdued after the Knute Rockne era of the ’20s.

Unlike the hip of Rockne’s teams, the hut of the post-war era (for college and professional teams alike) did not necessarily signal a shift of the offensive line. The quarterback could signal for the center to snap the ball on the first, second, or third hut without any shift being called. One early print example of hut (discovered by word sleuth Barry Popik) comes from the Sporting News of Oct. 20, 1954: “Mitchell snaps into position, starts his call and is ready to give it the ‘Hut-two, hut-two.'” The Los Angeles Times of July 9, 1955 explained hut in an article about the streamlined system of signal calling used by the L.A. Rams under the coaching of Sid Gillman: “When the quarterback gives the snap at the line of scrimmage (‘Hut-one… hut-two… hut-three,’ and so on) he sings it out in a nonrhythmic tempo so that the enemy cannot anticipate the center’s snap.” Since then, quarterback cadences have evolved even further, though hut has remained a common feature.

Of course, this was far too much history to fit into in a brief television interview. But it was a lot of fun digging through the archives to piece together the elaborate back-story of a powerful little word.

As it is the offseason, we here at Kentucky Prep Gridiron became interested in the origins of hut and why it is so commonly used, even still today, as a snap cadence so we thought you would enjoy Mr. Zimmer’s article. We decided to run it as it appeared on his site, with a link back to his site, as there was no way we could ever improve on how he wrote it. Kentucky Prep Gridiron thanks Mr. Ben Zimmer for his excellent work. This is Fletcher Long reporting for Kentucky Prep Gridiron, reminding you to PLAY THROUGH THE WHISTLE!