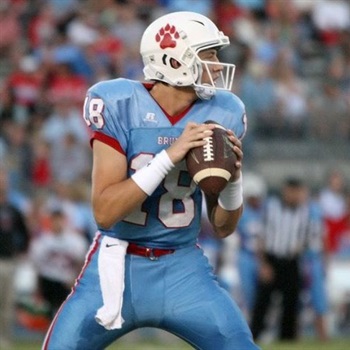 I first met Jacob Buie at the V7 Elite Combine in Nashville, Tennessee.  I was impressed with his point of release, how quickly he got the ball out, his drop, set-up and overall athleticism.  Obviously he had the classic stature and build colleges crave and could make every throw on the route tree.  At the time I met him, and curiously I might add, Jacob didn’t have a single D-I offer, though he had been invited to several camps.  His lack of offers wasn’t anything attributable to him, it was an ignorance as to how the system really works and just how to gain the publicity insuring one maximizes his opportunities.  I was so impressed with Jacob that I included him in an article I wrote on this very site about the combine.  You may remember, it was entitled Dingle, Trice, Long, Coleman and Bland Stud Out @ V7 Elite Combine Series.

Later, Coach Cary Fowler of Eastern Illinois University (EIU), who is a long-standing friend of mine, came by my house in Hopkinsville, Kentucky to tell me how impressed he was with Kentucky Prep Gridiron and he shared he was impressed with what I had published about the “Buie” kid from Jackson.  I suppose after his having read what I published, the parties must have connected which culminated in EIU being the first offer for the 6’5″ 205, rocket launcher, from Jackson, Tennessee. Now that a prestigious FCS school has pulled the trigger and offered Jacob Buie, watch the kid blow up!  We don’t have the words to adequately express how pleased we are at KPG to know it all started with our evaluation of him from the Nashville V7 Elite Combine Series and a Coach reading our online publication.

On this Memorial Day remember our fallen…those who have given all for the freedoms we often take for granted.  Have a pleasant time with your family and friends; but also, reflect on the reality that for your son, to get where his talent can take him, he (and you) will need a little help from us.  Don’t sweat it, we are here for our subscribers, maybe you should consider becoming one…Congratulations to Jacob Buie and