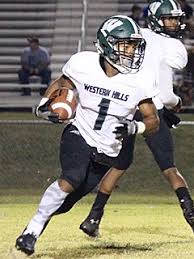 Wandale Robinson is a rising senior who stands 5-8 and weighs in around 175 pounds. He recently attended the Best of the Mid-West Combine where he registered the fastest time at the entire combine, a blazing 4.22 in the forty yard dash. Robinson, for Western Hills High School in Frankfurt, Kentucky, gained some 2,400 all purpose yards as a sophomore and followed that up with over 3,000 all purpose yards during his Junior year. Wandale is a very humble kid, but has plenty about which to be cocky were he to choose to be so, as he has around 15 offers to play college football already. Wandale, whose dream school is reported to be Florida, will be attending the Nike Opening, to which he has been invited, in April. Should Robinson run a laser timed 40 at Nike’s combine, like he did at The Best of the Midwest, we predict his camp and combine days are over and those 15 offers will become more like 40. Basically, he will go anywhere he wants to play his college ball. Kentucky Prep Gridiron would like to go on the record by saying that Robinson, together with Milton Wright from CAL, are basically a two-horse race next year for Kentucky’s Mr. Football. Remember where you heard it!

Congratulations to Wandale Robinson for his Revolutionary Play which has earned him an invite to Nike’s Opening and will soon earn his ticket to play football on Saturday nights. Congratulations Wandale Robinson for earning this week’s recognition from the fastest growing bank in the Commonwealth of Kentucky…your friends at Independence Bank. Kentucky Prep Gridiron thanks Coaches Carlos Collins and Glenn Bednarczyk from P2P for their contributions to this article.