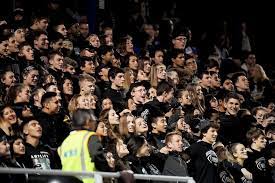 Incidentally, we are 22-2 on the year. It will be interesting to see how well or poorly we do this week.

Here is this week’s version of the “dirty dozen” football games to be played this Friday night, with the first game playing tonight, and who will win and what the likely score will be. Good luck everyone!

Why would Owensboro (Senior) High schedule this game? Have to play them. Both teams are in the first district.

Owensboro hasn’t slowed a single beat since Wimsatt’s departure for college. One area coach told me it almost made the Red Devils harder to play. Owensboro will beat Muhlenberg as badly as it wants.

Many people in 2A are scratching their heads wondering what in the world is wrong with Breathitt. No team has been hit as hard by the pandemic than these guys. One of their five losses was a COVID-cancellation.

Breathitt could have beaten Perry County, were in the game for at least a half with North Laurel with a 4th-teamer under center, and played with Dunbar well into the 4th-Q. Breathitt enter the game winless and Morgan’s Jordan Sexton may be the best RB in the district.

We like the Bobcats at home on the Riverbank here.

The Rock, as they are called, are a scrappy bunch and we have seen some mighty good teams come from there. Dudley Hilton, Bell’s head man, is the second winningest football coach in KHSAA history. Hilton will add to the win total, we think anyway.

What in the world is Butler County doing leading the pack in the 2nd-district? Don’t they know that district is property of Owensboro Catholic? Well someone forgot to sent Butler that memo.

We can remember years where Butler, a historical doormat in the district, wouldn’t have expected to come within 50 of Hancock. My how times have changed.

We have to say this is one of 2A’s toughest districts. Caldwell is very well coached and has improved every week since dropping its opener to a terrible Christian County Colonel squad.

They haven’t improved sufficiently to play with “mighty Mayfield.”

I have a friend in Madisonville, Kentucky who works as a scout for us in the area. This guy is the best scout we have ever had at KPGFootball. You can set your watch by this guy’s information and analysis.

Before writing this article, we called him and asked, “Can North beat Hoptown this weekend?” His answer was perfunctory but brilliant in its brevity.

“Nope,” he answered. Good enough for us.

I am willing to bet you Pikeville scheduled this game thinking it would get itself an easy 6A victory. The old RPI-builder, right?

Who could blame them? Madison Central won all of two (2) games over ’19 AND ’20. That was before they hired one of Kentucky’s all-time head football coaches in “Whistling” Mike Holcomb.

These two teams both played LCA this season. It is the only loss for them both.

We would like Pikeville in Pikeville. In Richmond; well, our opinion is a bit different.

The Ryle Raiders are tough. They are a difficult team to have to play and they rank highly in the 6A classification’s weekly top-10. You know who else is tough? Louisville St. Xavier, and they have the best offensive center in Kentucky football in Carter Guillaume.

At the end of the day, Kevin Wallace was brought to Louisville from Bowling Green to win championships. So far, he’s not getting it done. However, this just might be his break through year, at the Louisville private school as he won multiple titles at 5A BGHS.

This game is a huge, huge game and district seeding is riding on its outcome. Either one of these teams routinely has the requisite talent to challenge for a 5A title. We like the Spartans in this one.

We all remember times when Simon Kenton would have beaten the almighty crap out of Corbin or any other team in the 4A classification. Well, those days aren’t today.

Corbin maybe the betting favorite to win it all in 4A this year. Simon Kenton is an early exit in 6A.

No team in Kentucky outside of Male and LCA have the type athletes Corbin has on its roster. We believe these hounds will hunt.

Ashland Blazer (AB) is the reigning champion in the 3A classification. We don’t think they have that kind of talent this year. They lost a lot to graduation.

Want to know who else lost plenty to graduation? Elizabethtown High School was hit as hard as anyone. Both of these programs find ways to win and are among the very elite programs in their class.

AB, like Caldwell, has improved every week. They are too much for the Panthers.