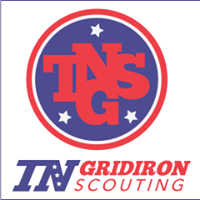 I have to start off by saying that when I corresponded with Carlos Younger, President of TN Gridiron Scouting, and he inquired as to whether I was available to attend the Nashville, Tennessee Future Stars Combine as a special correspondent for his outfit, I couldn’t say yes fast enough. No one does it as well as Carlos Younger. I am thrilled to get this opportunity. I also want to say how delighted l was to get to see one of my all-time favorite Tennessee Future Stars in Toleo Malone. Toolie is like a son to me, and is one of my son’s closest friends. The two of them both completed their own Future Stars journeys this past summer, both of them being three-timers. Toolie is playing for The Ensworth School in Nashville and is a bone fide star, just as we all predicted, not that the prediction required any Nostradamus-like abilities. I want to begin by saying this article isn’t meant to imply we captured every good player at this combine or even every player who will eventually make the team. However, I was asked to attend and give my thoughts and I have done so herein as best as I was able.

In talking with director Josh Jones after the combine he was particularly impressed with the 7th grade QBs and WRs. One of the 7th grade WRs who caught my eye was Zamariyon Kendall from Paris, Tennessee. Kendall is a 5-9, 162 pound wide-out who exhibited good burst and explosion and provided a bigger than usual target for the QBs than what one normally sees, split wide, in the class of 2023. Zamariyon is really agile and quick and exhibited better than average speed and change of direction ability. Henry County should be very excited about what he brings to the table for its football team in the future.

Another 2023 player who had a very impressive combine, though it was limited, was QB Jadyn Davis from Murfressboro, Tennessee by way of Atlanta Georgia. Jadyn had to leave early, which is why I didn’t get a picture of him from today. However, he didn’t leave before he impressed us with his physical skills and ability. Jadyn is 6-0 tall and weighs around 160 pounds, with nice length and zip on the football. He gets it out quickly and from a nice position and can make any of the throws required of a QB. We were buzzing about him at the combine long after he had left.

Among the 7th graders, Paris, Tennessee scored another big-timer and this guy was big in more ways than just time. Drew Beaver worked out as a combo DL/OL and is a well put together at 6-3, 269 pounds. He showed excellent agility and ran better than you would expect a 7th grader who has found himself in this HUGE frame. During OL skill work, he looked comfortable in his stance and fired out, in stead of standing up, demonstrating better than average core strength. Beaver also has really huge mitts (hands) with excellent length. This guy is going to get taller and settle in along an offensive front at Tackle would be my guess. He can hold several more pounds on his frame. Needles to say, and pardon the pun, but I am a big believer in Beaver.

Before I move on to the 8th graders I want to sing the praises of Jerran Jackson from Nashville, Tennessee. This 5-10, 235 pound stud may have been the best lineman at the combine regardless of class. He was, without much question, the class of the 2023 linemen. He’s limber, he’s agile, he runs well, he has excellent hand punch, he has excellent get-off, he plays with excellent leverage, he plays angry. He destroyed every single person with whom we matched him in the one on ones. Jerran told me he is an OL-DL for his present team, with his being deployed as either the nose guard in an odd front or the 1 technique in an even front’s over/under look. He would be hard to handle for any 7th, or even 8th grade, Center.

I was a little bummed to hear Ty Simpson from Martin, Tennessee, recently offered by Michigan as an 8th grader, wasn’t competing again this year. Would have been nice to have Simpson, however, Evan Kelley (Davidson Academy, Nashville) brings both the same skills and build to the table. Evan is 6-1 and weighs 190 pounds and the Bret Cooper Junior All-American is sporting a cannon slung from off his right shoulder. Kelley drops well, set up perfectly, stands tall, and gets the ball out from the proper over-hand position. The ball doesn’t sail on him, like other young QBs, because he is releasing it down-hill. If the WRs can catch it, he will fit it in there. Can he move you ask? Well, how does a 5 flat 40 yard dash time, into the wind, on a wet track sound? As an athlete and as a QB, Evan Kelley had one heck of a combine.

Kavon Coffee is a WR from Antioch, Tennessee who ran the fastest 40 time at the entire combine. Frankly, during the pass on air session, I would have liked to have seen (not to say he didn’t catch it well when I was elsewhere but he struggled in front of me) Mr. Coffee exhibit better hands, but just like mass is mass; the same is true of another of my favorite attributes on football players…speed is speed. Coffee ran a 4.66, 40 yard dash, on a wet track into a head-wind. You just don’t see that kind of speed on 8th graders often, though you will see it at a Tennessee Future Stars Combine more than elsewhere. Coffee told me he has been timed back home at 4.5 in practice. Yeah, that sounds about right. Can’t catch but can run like the dickens; maybe the kid is a defensive back. Who knows? That aside, it would be hard to not draft this kind of speed for a football team if it is available.

Another intriguing RB prospect who was certainly fast and passed the eye-test was Pulaski, Tennessee’s Chaye McElroy. McElroy clocked a 4.9 40 yard dash and demonstrated excellent quickness and change of direction both in the route running sessions, on air, and the agility and skills portions of the combine.  Chaye is 5-9 and weighed in at 165 pounds.

Josh Strickland is a RB from Dickson, Tennessee enrolled and slated to play his HS football at Nashville Christian. Strickland is 5-9 and weighs in at a solid 180 pounds. He has really good hip explosion as he exhibited in the broad jump where he leapt 90 inches. Hard nosed, between the tackles, running back whom we used to refer to as a one-cutter. The kind of back who makes one cut, plants his outside foot, squares up, and then plants you. Didn’t see his 40 or pro-agility, but with a 90 inch broad jump, how slow can he be?

Marcus Kennedy Holt is a 5-10, 270 pound, class of 2022 DT slated to play his high school ball for the Irish of Father Ryan High School. Talk about an immovable object playing inside technique. Man, Coach Brian Rector will be thrilled to get his paws on this man-child. What struck me about Holt the most was how nimble and quick-footed he was for a 270 pounder. I was very impressed with him and thought he was just another example of the prowess you see exhibited at events which attract the very best talent at this grade-level in the mid-state.

The biggest of the bigs was 6-3, 325 pound Aleric Watson from Nashville, Tennessee. Watson figures to be an offensive lineman, and honestly, speed isn’t his long suit. However, he has tremendous mass and length and he knows how to use both. Watson looked good in pass protection drills exhibiting his ability to vertically set and kick and drag back to intercept outside pass rush. Now Watson, and all the other offensive linemen at the combine in the 2022 class, tend to open up a little too much when dropping. This results in their hips getting splayed out (which you will notice when you see the drop foot open instead of squared up, with the toes down field) making it hard for the lineman to recover and shut the door on the up and under move. One thing for sure about Watson is mass is mass and you sure aren’t going to run over him.

I remember when linemen were basically the five fattest dudes walking the hallways. With the advent of fast break offensive schemes and multi-level blocking responsibility for linemen expected to either pull out ahead of backs or blocking the down-field zone to the defense’s third level, one thing is for sure, linemen nowadays have to be able to move their feet and bodies. Max Neuroth from Brentwood, Tennessee and slated to play at Brentwood High School, measured today 6-1 and weighed in at 247 pounds. Neuroth has really long arms and moves his feet well while exhibiting really good quickness and agility. This kid was the best athlete among the 2022 offensive linemen. He will get taller, he will fill out, and when all that happens he will be scary.

Jalen Brockman came with Evan Kelley as the two of them are both slated to play for Davidson Academy next year and Brockman looked like the kind of offensive lineman who could see early playing time. Jalen ran the 40 yard dash in 5.8, and as I have mentioned at least a half dozen times, these boys were running into a significant head wind on a wet turf. For an 8th grader who is 6-2 and weighs nearly 280 pounds, and who hasn’t done squat number one in the weight room, that is moving. Jalen has long arms and a good core which he demonstrated by his ability to transition from the three point stance into pass protection without his hip-level changing noticeably. If Neuroth was the most athletic big, then Brockman as a close second. As an O-line coach myself, I will take 280 pound 8th graders who move like Jalen Brockman all day long mister!

As you can certainly tell, the talent which was on hand in Nashville today was special as Josh Jones told us when we caught up with him after the combine. Josh went on the record as saying…I saw some one-of-a-kind type kids today. This combine was deep for the class of 2023 (7th grade), particularly at QB and WR. Many of the 8th graders (2022), you can tell, will be immediate, day one, impact players at their respective high schools. Over 100 kids competed and I am excited to see what awaits Tennessee Future Stars when we hit Memphis next.

Thanks again to Carlos Younger for permitting me to do this. This was a lot of fun. This is Fletcher Long, special correspondent to Tennessee Gridiron Scouting and additionally reporting for Kentucky Prep Gridiron reminding all Future Stars to PLAY THROUGH THE WHISTLE!