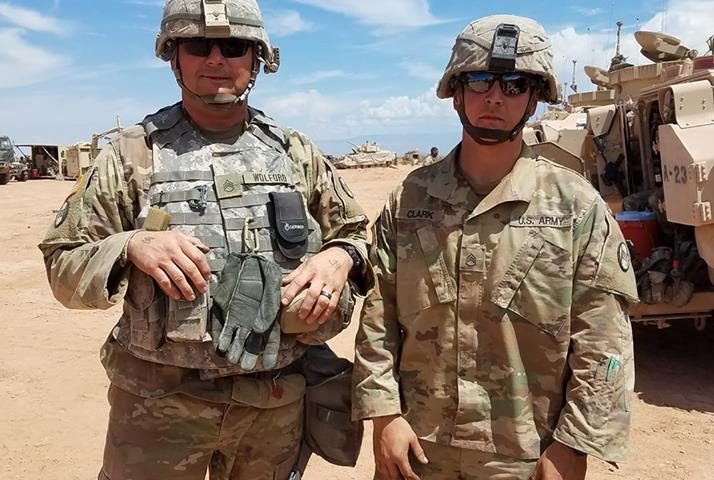 Editor’s Note: Ethan Wolford, presently a junior in High School, and KPGFootball’s top rated offensive center in Kentucky’s Class of 2020, has sent KPGFootball the following article which we proudly publish and distribute as a shining example of the type of kids playing the great sport of football across the Commonwealth of Kentucky. Ethan, or Big E as he is called, is one of our favorites. We are sure he is about to become one of yours too…

My name is Ethan Wolford. I play high school football for a small school in Eastern Kentucky, the Belfry Pirates. I have been asked to write a little article on what it’s like to be the son of an active duty Army soldier and how it has affected me while being a football player. First off, I’d just like to say it’s an honor and privilege to have been ask to write this article because most people really don’t know the sacrifices families of Soldiers are regularly required to make. I also want to thank both KPGFootball for giving me this opportunity to write an article for its online magazine. Thank you!

First off, I just want to tell you a little about myself. I’m the starting offensive center for the Belfry Pirates, a 3A school in Kentucky, and I wear #55. I’m 6’2” and weigh in at 270lbs. I’m a junior this year and a part of the 2020 graduating class. I’ve started the last two years for the varsity team and won a State Championship my freshman year with the Pirates, also winning a State Championship my 8thgrade year for the middle school Buccaneers (Belfry Middle School). Coming into high school I was selected to attend the FBU camp in Washington, DC where I competed and won the Top Lineman award which came with an invite to Rock Hills, SC to compete in the Top Gun Showcase. I was also the starting offensive center in Kentucky’s East/West All State game, playing for the East squad. I’ve been selected to compete in the NUC All-American Game this winter in Daytona Beach, FL.

As a prospect, I’ve had visits to Marshall University, Louisville, Cincinnati, Miami OH, Tennessee Tech, EKU, and Glenville State and am set to go on a visit to Penn State sometime this year. I also made the All-District team, All-Mountain team, and KPG’s (Kentucky Prep Gridiron) Sophomore All-State football team. I’ve been rated as the top offensive center in the state of Kentucky for the 2020 class. I received my first offer to play college football, after my sophomore year, at Glenville State. I’m also a wrestler at Belfry, in the heavyweight class (225-285lbs), and going into my junior season I’m only 11 wins away from being Belfry’s all-time winningest wrestler at that weight. While I may sound to be boasting, I am not. I have told you the above to tell you what is below appearing.

Most of my accomplishments would not have been possible if it were not for my mom and dad. I know almost all athletes would say this and agree with me. So what sets me apart from most athletes, you ask? What’s different is that my dad is an active duty, Staff Sergeant in the U.S. Army. My dad is my biggest fan and supporter, with the exception of my mom of course. My dad is the one who gives me an assessment of how I play, what I need to do to fix my mistakes to become a better football player, and is always there for me whether it’s a football game or wrestling meet. I am fortunate to receive from my dad 100% of his support when he can. Sadly, my dad cannot always be around which is why I’m writing this article.

If you will indulge me a bit, I would like to tell you something of my dad. His name is SSG Tommy Wolford. He joined the military a while before I was born. He first went in the military in 1994 right out of high school. After Infantry Basic Training, AIT, and Airborne School, he was stationed at Ft. Bragg, NC where he was a part of the 2/504thParachute Infantry Regiment of the 82ndAirborne Division. He’s been a part of the 2/19 Special Forces Support Group and it was during his time there that I was born. He briefly discharged from the Army but then re-enlisted when he decided he needed to get back in because of the mounting War on Terrorism as it was starting to heat up after 9/11. SSG Wolford has been at this post ever since as part of Alpha Troop 1-150thCAV RGMT, Scouts.

My dad was a Sergeant First Class (E-7/SFC) but had to take a reduction in rank to assume his present duties. Seems like he’s gone more now than ever but I get it. My dad has been deployed to Iraq and other places around the world either fighting the bad people or for training exercises and missions. My dad has missed a lot of my games and meets, not because he wants to, but because duty has called. While both mom and I are frustrated by this, we know it’s part of his job and our job is to support him no matter what, take care of things back here on the home front, and be waiting for him when he gets back home.

I’ve caught myself many times, either during games or running through the tunnel, looking up in the stands to where he always sits searching for his approval only to find an empty seat. Sometimes, after realizing that he’s still gone, I find myself wondering if he’s ok instead of giving my 100% attention to the game. Then I remember what he would always tell me: stay focused on what’s at hand, don’t get distracted, don’t worry about me, I got this, and always give 110% to your coaches, teammates, and fans and nothing less!

While it doesn’t make it easier, I try not to let mom see that Dad’s absence affects me but it’s hard for me, a seventeen year old, not to worry about my dad when I know that, at any moment, something could happen which could drastically change all our lives forever. That’s brings me full circle back to why I decided to writ this article. I am not doing it to brag about my accomplishments, and I hope people don’t take it as that because God knows that’s not why I wrote this.

I wrote this because I want people to understand the sacrifices that military brats like me have to make and, more importantly, why guys like me should cherish every moment they have with their parents, who deploy, and vice versa. I want the student athlete to know that not every parent can be in the stands at every game or school function and for them to also cherish, appreciate, and be thankful that their loved ones are there for them.  Not all of us are so fortunate.

It’s hard after big games when I see other dads hugging their sons after a big win or a tough loss or on Parents Night when I look around and see everybody has both their parents with them and it’s just mom with me. Those moments when I look over at my mom standing there with tears in her eyes, I don’t even have to ask what’s wrong. I already know. That’s what hurts the most.

I get choked up just thinking about it. However, it’s the time that I have him here by my side, now, that I need to appreciate. It is the now of which I both need and intend to take full advantage. You can only live for the here and now, not the future, because none of us know what the future may hold, for good or bad. We just have to weather it, day by day.

In closing, I just want people to appreciate what our military does for us and the hidden sacrifices that they, and their families, have to make, every day, just so we can live in the greatest country in the world. Do me a favor, if you find yourself willing. On Friday nights, when you’re in the stands waiting for the big game to kick off and The National Anthem starts to play, please stand up and face our flag! Please be proud! Please remember all the sacrifices that have been made by all the brave soldiers, male or female, whom have made them. Maybe, just maybe, there will be a young man or woman at the game you have elected to attend, standing down on that field, or on that court, whom has way more on his or her mind than you realize and about which you have neither perception nor perspective. Maybe, by doing that one simple thing, you may make a huge difference in that young person’s night.

Thank you for taking the time to read my article on some of the stuff which happens in my day to day life. At the very least, consider what you do and whose life may be impacted by what you do and…God Bless!