Once again it is the first of the week, which means it is time to anoint another Independence Bank player of the week. Independence Bank is proud to sponsor a weekly article highlighting players in the areas where Independence Bank flourishes who embody the same type of revolutionary service to their respective football teams which has made Independence Bank unique and special in the banking industry. Independence Bank has a goal of achieving everyday excellence and this week we are focusing on a player whose performance exceeded both the Colonels’ and the Hopkinsville community’s expectations and a player who is taking his talents, next season, to play for Kentucky Wesleyan University in Owensboro, Kentucky. We are focusing on a 2018 Linebacker who seemed to both strive for and achieve excellence every single day he walked on either a practice or playing field. That player is Class of 2018, new Wesleyan Panther, Shamar Foster. 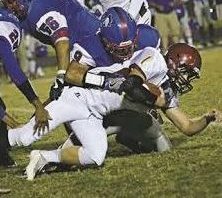 Shamar Foster quickly established himself, this past season, as one of the biggest hitting, intimidating LBs in Kentucky’s 5A Classification. According to one of Foster’s coaches at CCHS, Darell Keith, Shamar is just as talented cerebrally as he is gifted physically. He’s really a quarter-back on the field for the defense. You don’t see that much anymore. Christian County High School, which played superb defense much of the year on its way to a, first-ever, 10-0 regular season (and an overall 11-1 work slate), found, in Class of 2018 Foster, the type of frame, power, explosion, and side-line to side-line pursuit taylor-made for the linebacker position. Foster helped to anchor a defense, this past season, that in 12 games (play-offs included) only surrendered 163 points, or a little below 13.6 points per contest. It’s not exactly like the Colonels didn’t play anybody either as 4A State Quarter-finalist Hopkinsville High School, 3A State Quarter-finalist Caldwell County, and Class 5A State Semi-finalist South Warren, in addition to multiple other play-off qualifying football programs all dotted the 2017 football schedule. 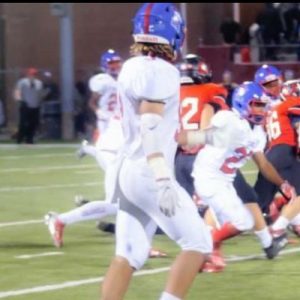 Coach Lovelace and the Colonel staff will be challenged to put a team on the field in 2018 to rival what they had this past season as the Colonels lose many first-stringers. Of course, at places like Christian County High School, there are never a shortage of athletes and talent. Second-line players at places like Christian County High School would start many other places all over the Commonwealth of Kentucky. We, at Kentucky Prep Gridiron, assure you the Colonels will be re-loading much more so than re-building. Still, players the ilk of Kolbe Langhi, Shamar Foster, Peyton Leneave & company don’t come around, for most folks, very often. Replacing talent like that is no small order. As a high school football coach, if I were going to be tasked with replacing football talent the likes of a Langhi, a Foster, or a Leneave, I would sure hope I was coaching at a high school with the tradition and talent reserves of Class 5A Christian County.

Congratulations to Shamar Foster for his Revolutionary Play which has earned him both a ticket to play football on Saturday nights together with this week’s recognition from the fastest growing bank in the Commonwealth of Kentucky…your friends at Independence Bank.