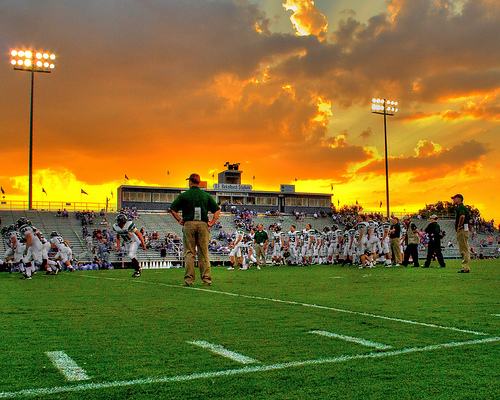 This week we are going to narrow our focus on just games we consider to be marquee match-ups. Let’s get to it!

Belfry vs. Archbishop Alter…This game pits one of the top teams in Kentucky, ranked 17th overall according to CalPreps.com, against the 43rd highest regarded team in Ohio, which has way more population and, therefore, high schools playing football than does Kentucky. Belfry is ranked No. 2 in its classification in this week’s AP football poll and have speed all over the filed. We are big believers in the quality of Kentucky high school football.

Warren East vs. Greenwood…This is a game we would have seen differently preseason then now. We literally had no clue Greenwood would be as good as they appear to be. Warren East is struggling more (1-2) than we thought they would and when they have lost, they have been hammered.

Trigg County vs. Ballard Memorial…Trigg plays in a tough district, particularly with Paducah Tilghman out there looming so those concerned about the quality of competition Trigg has played thus far shouldn’t fret, there is still competition on the horizon. Trigg has the talent to beat anyone. Kendric Adams and Cade Bleidt are as good as it gets as high school linebackers and Cameron Jordan may be the class of his graduating class as a duel-threat QB. Trigg’s trek of having to play football teams which can possibly beat them won’t be this week. Ballard Memorial is terrible and have gotten worse every single year Mark Brooks has been there. Don’t know how he still has a job.

Highlands versus Simon Kenton…Both of these teams are 2-1 on the year. That is the only way in which the two of them are even remotely similar. Highlands loss was by three points, on a neutral field, playing Tennessee’s very best football program at any level (Knoxville Catholic). The Bluebirds are back in a big way and will be in the picture at the end of the year, we assure you.

Christian Academy of Louisville vs. Ballard…CAL, the top-ranked team in Kentucky’s 3A classification according to the AP, had to take South Oldham to overtime to beat them 6-0 and didn’t look too good last Friday night in beating a winless Eastern team 35-0. Ballard, though 1-2, got hammered by Male but barely was overcome by North Hardin, 10-6, and North Hardin is LOADED! Ballard can play with anyone and may well upset CAL if they can control unforced errors like pre and post-snap penalties and turnovers. Going out on a limb here but…

Hopkins County Central vs. Todd County…Todd County is undefeated in 2019 and Hopkins County Central has yet to win a game. Got in trouble for this last season, but folks, Central is a not-too-terrific football team though they have some nice players. Todd County is on the cusp of going 4-0, are excellently coached, and have some really good players like returning all-conference (Big Sky) player Ja’Twan Graham and senior QB, Bryce Nolan.

Crittenden County is one of the top teams in the 1A classification (4th, AP) and is playing a ranked team in the 2A classification (9th, AP) who is coming off being counted by Hoptown at the Stadium of Champions in Hopkinsville, Kentucky. If Caldwell doesn’t get too pass-happy, like they did against HHS, they have the horses to win this game, particularly on defense. Otherwise…

The back-to-back Class 4A State Football Champion (Franklin-Simpson) is 0-3 on the year and have been routed in two of the three games it has played. BGA is hosting the game in Franklin, Tennessee and are 3-0 on the year with wins McGavock, Father Ryan (who beat Bowling Green High School in Bowling Green in week zero), and Goodpasture Christian who they counted. Franklin-Simpson we would like to introduce you to something we call 0-4!

Madisonville North-Hopkins vs. Christian County…The Bible says if one has the faith of a mustard seed that person can actually walk on water. Don’t doubt that is true but we haven’t ever seen anyone do it and are unaware of anyone in the entire universe, alive today, having the ability to accomplish the feat. We suppose it is possible for Christian County to beat North-Hopkins on Friday night. We think the Maroons might be the best team in Kentucky’s Class 4A. What amount of faith do we have in the Colonels beating the Maroons? Let us put it this way, it is less faith than we have in our ability to walk on water.

McCracken County vs. Mayfield…This is the annual “who cares in what classification of football your team plays” bowl. McCracken, a Class 6A Kentucky high school, plays Mayfield every year and loses to the Class 2A, top-ranked team (AP) most every year. There are years where McCracken makes the game interesting and this Mayfield team isn’t as good as some versions of Mayfield High School we have before seen. However, this McCracken County team isn’t as good as we have before seen them either.

Hopkinsville vs. Henderson County…This game is in Henderson, Kentucky and we have been the first to acknowledge we were wrong, pre-season, about the Tigers. They are a very good team. We really had no idea what kind of team Henderson County would be preseason and, three games in, with wins over two Indiana powers and Christian County (every team’s desired Homecoming opponent), it looks like they are the class of 6A, District 1. Depends on how the Colonels attack the Tigers as to which team comes out on top. If they single cover Reece Jesse, Jr. like Caldwell County and Mayfield, he will replicate what he did against Mayfield and Caldwell and Hoptown will win. If they double Jesse, bring heat up the A-gap, and make something other than “Bland to Jesse” beat them, Henderson County has a chance to win. We are going to go out on the limb again here.

Owensboro Sr. showed itself to still be quite formidable in beating Owensboro Catholic last week 38-6. Apollo can’t seem to get anyone stopped on defense. OHS has four starters out with injury but we hear Austin Gough is ahead of schedule to return. When he returns, the Red Devils turn immediately into Class 5A Title contenders.

Corbin vs. Beechwood…Beechwood has learned the hard way Class 2A can play a little football. Last week they got humiliated by Somerset. Somerset is an elite 2A team. Now on August 30, Beechwood, a 3X (not defending because of realignment) Kentucky Class A football champion, learned they aren’t exactly the same team which has terrorized Class A football in Kentucky. They lost to Paintsville High School (Class A) in Georgetown, Kentucky. Beechwood is about to learn how 0-3 feels.

Estill County vs. Breathitt County…Breathitt Count is really good as AP voters have learned (3rd, AP, 2A). Estill County, which played the Hell out of Letcher County Central in Whitesburg this past Friday night before losing 40-36, is a dangerous team to play. Class 3A Estill can’t be taken lightly in this matchup on the Riverbank. The Blue Wave (Breathitt’s O-Line) has led Charles Andrew Collins, Dalton Manns, and the boys to 776 yards (3 games) on only 69 carries with 13 rushing TDs.

Anderson County vs. Franklin County…Coach Peach, we have a question for you at KPGFootball. What in the ever-loving Hell where you doing visa-vie play calling in the Mercer County game. Mercer won 15-13 to an Anderson County team which would have won the game handily but for the incessant passing, down after down. RUN THE FOOTBALL! Franklin County is a really good football team and are undefeated on the early season (3-0). If the Mercer County gam-plan and play calling continues, we like Franklin County in this game. If he will just give the ball to Zach Labhart and let him run behind his big O-Line, Anderson County should get right back to its previous winning ways. Anderson County plays really well on defense and with Kentucky’s best DE (Darion Dearinger) little wonder there.

Lexington Christian’s only loss on the year was to Belfry in the Pike County Bowl 39-20. That score is a bit misleading as LCA trailed 26-20 in the 4th quarter before a couple of cosmetic scores by the Pirates. LCA is really good, really good and Madison Central is really struggling.

E-town’s only loss on the year was to North Hardin, one of Kentucky’s very best football teams. The Panther lost that game by only 6 points. Central Hardin has beaten three nobodies, Daviess County, John Hardin, and Apollo. They aren’t playing a nobody this Friday night.

The battle of the Oldhams, South vs. North…Does North Oldham ever beat South Oldham. Well, they won’t this year either. Bednarczyk and K-Mart will run the clock on this boys.

St. Xavier vs. Central…Man did I take a lot of crap, preseason, when I predicted there was no way Central would be anywhere close to as good as it was in 2018 owing to the production from off the roster it graduated. Well, three games in Central is 1-2 and no where close to as good as it was a year ago. St. Xavier let Male ring them up for over 50-points. I got some flack from dropping them from the Top-10 in 6A when I turned in my votes for the AP poll this week. It’s this simple, Top-10 Kentucky 6A football teams don’t let the Dallas Cowboys score 50+ on them.

There are the 20-games we picked this week and why we picked the teams to win we picked. We will continue to pick games of interest throughout the season. Hope you enjoyed the commentary. We are sure roughly half of you will not.