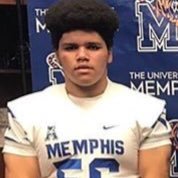 We here at Kentucky Prep Gridiron are not using the term Puncher’s Chance as it is normally used. A Puncher’s Chance is a term associated with the underdog’s chance to win a boxing match if he can land a lucky blow. The ability of a football player to violently bring his hands and create space between himself and an O-lineman attempting to block him is called a Punch. For an Offensive Lineman it would be his shooting his hands into the breast plate of a charging Defensive Lineman to slow his advance into the backfield. Payton Leneave has what this author understands to be the hardest punch in Kentucky High School football. It has been described to me as devastating.

There is nothing about Leneave’s game I don’t love. He bench presses over 400 pounds, power cleans 350, and squats over 600 pounds. He is consistently timed in the 40 yard dash in the 4.7s, 4.8’s and can dunk a basketball easily and with flare, no small feat for someone 5-11 tall and weighing 265 pounds. He is extremely quick off the ball, explosive and violent, meaning he arrives at his target pissed off, which is what you want. I also hear, in addition to his playing along Christian County’s defensive front, the Colonels plan to line him up at fullback this year too. We could see him being an I-formation fullback in college for teams who utilize that formation. Peyton has the grade point average and test score requisite to being a qualifier through the Clearinghouse though I don’t believe he has yet made application for clearance as of the date of the publishing of this article.

Now I talk with a lot of college coaches who make recruiting trips through the area. Believe me, with the athletes regularly produced at both Hopkinsville High School and Christian County HS, coaches regularly troll through Hopkinsville, Kentucky hoping to mine some of the bountiful talent produced. I talked with one about Payton Leneave and he told me Leneave may well be the most intriguing prospect in Hopkinsville’s 2018 class. That is saying something considering there are numerous prospects in the county of Christian holding either FBS or FCS, Division I offers presently. On top of that, Payton doesn’t

have the traditional frame Division I college coaches seek. Then again, neither did former college All-American and member of UT’s All-Century Team, Jesse Mahelona, and this is not a comparison made lightly.

Here’s the straight skinny on Leneave for anyone interested. Leneave is a short tackle on the next level who will benefit from playing next to taller tackles by going underneath offensive linemen. When Leneave gets a hold of somebody, he doesn’t let them go. In the right setup along a college defensive front, Payton Leneave has the speed, quickness, explosion and strength to be the slightly undersized guy in a front constantly blowing up plays with middle pressure. Kentucky Prep Gridiron believes Leneave is among the very best players at his position in the Commonwealth of Kentucky.