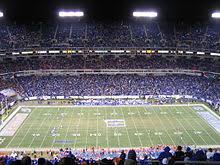 Well, you could have knocked me over with a feather as the saying goes. I get a call from Nathan Schwake offering me 150 tickets for the Music City Bowl to distribute to people in the Western Kentucky area, preferably middle school aged football kids and lower as a perk for the good work this site has done promoting football in the Commonwealth and featuring outstanding middle school football players who will be starring on high school football fields sooner than many of them can conceive. Nathan works in the PR division of UK’s athletic department and he overnighted the tickets to me, as promised. I dutifully distributed, absolutely free of charge (with the exception of the tickets to the Chaudoin family, who insisted on trading a big bag of deer jerky for their 8 tickets), all 150 game tickets and really could have used double the amount sent, as they went fast.  I distributed tickets with an emphasis on middle school players we have featured on our site who requested tickets from me. They needed to either follow me on Facebook or Twitter to know I had them as that is where I promoted the fact UK had so singularly distinguished our site and the work we are doing recognizing the efforts of players who usually go unnoticed. After that, I offered tickets to the AFI-KPG All-State selection committee members, comprised mostly of youth coaches from across the Commonwealth, for their hard work, rewarding them for agreeing to serve on the body which selected our All-State teams. Thereafter, I basically distributed them around Christian and Caldwell counties to anyone who asked, giving priority to those people who had either advertised or subscribed to this site but mostly just to people who knew of my having them and thought to reach out and ask. I didn’t deny anyone asking until I ran out of the tickets. Like I said, they really went fast.

One thing I have to state, right off the bat, is I have heard from everyone who attended that the seats were just fantastic. From what I have been told, and from what I viewed in the photographs which were sent to me, the tickets were field level, corner of the end zone, and afforded a tremendous vantage point from which to view the game. Franklin American Mortgage runs a first class game and operation and the outcome, though it didn’t go as we Kentucky fans would have liked, wasn’t ultimately decided until the very last play. Truly one of the best games of the entire Bowl season. The fact Coach Stoops’ Wildcats took a ranked, Big Ten team, right down to the last play of the game certainly indicates to me the Big Blue is on the right track from a standpoint of its football program and its National relevance. There were some football standouts who got this opportunity to see their first college football game because of the good fortune of being related to a super star Junior Pro or Middle School player and it was thrilling for the young kids to get to give this experience to their families who have done so much for them. I am grateful to both the University of Kentucky and Nathan Schwake for providing me both the ability and wherewithal to make an experience happen for young football players who couldn’t be more deserving and couldn’t have experienced this event without the generosity of the above mentioned. It was really fantastic.

There were some young Caldwell County kids who also were granted the opportunity to root on their favorite college team. Collin and Carter Whittington, whose father Shane works with my own father at the Caldwell County Medical Center in Princeton, Kentucky, got to cheer on The Big Blue. Their father sent me the photograph to the immediate left of this paragraph of the boys from the section which Kentucky so kindly provided. All in all, this was just a huge hit for the Kentucky fans who reside in the western half of the Commonwealth and who don’t get the opportunity to see The Wildcats play in person with the frequency of those people who live in closer proximity to Kroger Field at Commonwealth Stadium.

We started something in Kentucky Prep Gridiron which we hoped would be appreciated and would catch on as more and more people learned of it. We wanted to publicize the kids who go largely unnoticed in the Commonwealth, and that would be mostly the Middle School footballers who go ignored and unnoticed by other publications in spite of their prodigious and impressive efforts and results. Sure we cover some of the same Juniors and Seniors as Rivals and 247Sports but we can’t compete with those guys and haven’t the resources to even attempt it. We are attempting to gain notice and exposure for the guys Rivals and 247Sports haven’t featured…yet and those players of whom they would be impressed, but simply aren’t, because of the lingering perception we only play basketball in Kentucky, which, by the way, is demonstrably false. We at KPG wanted to thank all of those who have supported our efforts, this year, as well as induce some others of you to join the fight. The University of Kentucky graciously found a way to advance our battle for acceptance and legitimacy, and why not? In the end, it only serves us all, sooner or later. The smiles on the kids’ faces and glint in their eyes really were its own reward.

This is Fletcher Long for Kentucky Prep Gridiron, thanking the University of Kentucky and Franklin American Mortgage while still reminding all of you to PLAY THROUGH THE WHISTLE!