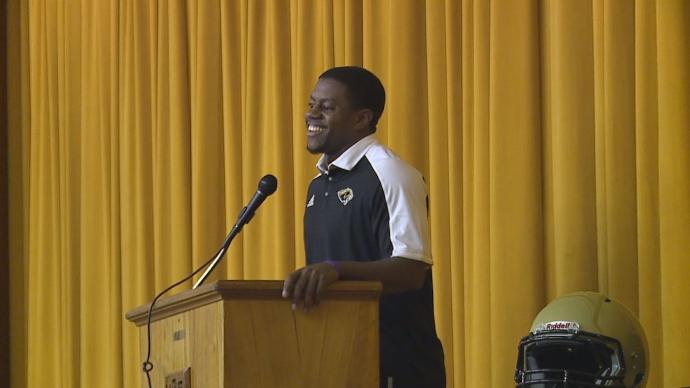 The ABC affiliate in Bowling Green, Kentucky, WBKO Channel 13, has reported that Russellville High School has named Mikie Benton as the schools’ new head football coach in a decision announced Friday. Benton, a former standout player at Russellville (2008 graduate), who went on to play collegiately at the University of Kentucky (2012 graduate), takes over for his former coach, John Myers who won 118 games and two regional championships in 13 seasons.

The Panthers’ alum spent five seasons as an assistant coach and this previous season as the defensive coordinator. Benton is the schools’ first-ever alum to be the head coach and only the fourth coach since 1976. Benton played for the Kentucky Wildcats in college and rose from the ranks of a walk-on to a leader on the team who made a name for himself working his way into the starting line-up despite overcoming two college position changes along the way according to a 2011 article which appeared in the Lexington Herald-Leader.

The article is linked here: http://www.kentucky.com/sports/college/kentucky-sports/uk-football/article44125806.html

Steve Brown, co-defensive coordinator and secondary coach when Benton was at UK and who principally coached Benton in college for the Wildcats, particularly credited Mikie’s perseverance in choosing to walk-on the Kentucky football team eschewing various scholarships offered him, coming out of High School, in track & field. Two of the track scholarships offered Benton, coming out of High School, were Notre Dame and Western Kentucky.  Mikie Benton won state track championships, in high school, in the 110 meter hurdles as both a junior and senior, and finished second in the triple jump his senior year. Benton played safety in high school at Russellville High School, was moved to corner upon joining the Wildcat Football program, appeared as a fixture on special teams, before ultimately being moved back to his high school position of safety where he eventually earned his way into the starting line-up.

As a program, Russellville has won three (3) KHSAA, Class 1A, Football State Championships (80, 83, 90), with Coach Myers leading the Panthers to two regional titles, over his tenure with the high school, which spanned from 2004-2017. Over that period of time, Coach Myers’ teams compiled a won-loss record of 118-58 with a winning percentage slightly exceeding 67%. Russellville High School is considered a destination job among many in the coaching ranks within the Commonwealth of Kentucky, particularly in the 1A Classification, where it regularly competes for State and Regional Championships.

Kentucky Prep Gridiron congratulates Russellville High School on a great hire and wishes Coach Benton and his football teams the same type of success his hard work netted for him on the athletic field when he was a competitor. This is Fletcher Long reporting for Kentucky Prep Gridiron reminding you to PLAY THROUGH THE WHISTLE!