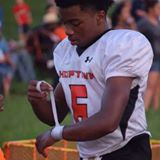 Civil Rights leader and martyr, Malcolm X, once wrote words to the effect that his being an old farm boy rendered him incapable of being chagrinned at the prospect of chickens coming home to roost.  There has been a prevailing school of thought that one has a difficult time coming home.  That attitude exists in coaching too.  That’s why, when it appeared the two middle school coaches had flown the coop, the Tiger community was melancholy at the prospect of replacing its Head Coach, Maurice Jesse, and Defensive Coordinator, Carl Banks.  The two had just guided HMS to an unprecedented 12-1 work-sheet, a Regional Championship, and a narrow defeat at the hands of State Champion TK Stone 38-36 in the State Semis in Lexington, Kentucky last Fall.

Christian County Middle School came calling on Jesse and Banks at season’s end singing a song as seductive as any siren upon the departure of CCMS’ outstanding HC Darrel Keith, who had moved on to NorthWest High School in Clarksville, TN to coach LB and OL.  Then, The Silver Fox (Craig Clayton) got the job at HHS.  A place where he went to two Championship Games; a place where he consistently put players in the college ranks; and a place where he coached Banks and Jesse.  All things considered, both Banks and Jesse have had a change of heart and have elected to remain in charge of the football fortunes at HMS!

The great F. Scott Fitzgerald once wrote, “It’s a funny thing coming home, nothing changes, everything looks the same, even smells the same, you realize what’s changed is you.”  Maybe, in the end, Jesse and Banks came home, not because of any perceived change at either HMS or HHS, but because of their own change of heart.  In the end, they are Tigers, and the only thing more difficult than riding a Tiger; is the dismount. Welcome home boys…in our hearts it’s like you never left!