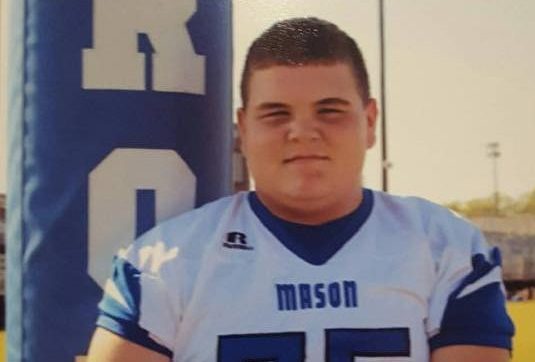 One of our chief competitors, we may be flattering ourselves as they may not know we even exist, is Youth1.com. We have a former Team Kentucky Future Star from Hopkinsville, Kentucky named Seth Henderson.  Seth is a 5-8 starter, along the HHS offensive line, entering, next season, his junior year. Well, Youth1, the year Seth tried out for Team Kentucky at the Bowling Green combine (which was at Warren East in 2016), wrote a small feature about Seth’s combine performance referring to him as a fire hydrant. Seth called me up, not sure what to make of the reference, and I assured him it was very flattering for an interior lineman, either offensively or defensively, to be so described. I told Seth, should he doubt that in the slightest, go up to a fire hydrant and attempt to move it. I am going to dust off that reference in regard to a 2022 interior lineman on this year’s Team Kentucky. Ladies and gentlemen…Jayven Hesler from Mason County, Kentucky (Maysville) is a fire hydrant.

Hesler is a 5-8 inch, 260 pounder who typically plays under (1 technique) in the Royals’ four man front with the ability to slide down to zero in odd alignments. He has excellent get off and maintains a low pad level through the engagement with the guard or center as is fully exhibited on his highlights. From what I have seen on his film, Hesler is a gapper and penetrator, as he has been deployed in middle school. In high school, Hesler will be called upon to hold inside gaps and blow-up inside traps while demonstrating more shedding, as opposed to gapping and stunting ability. Hesler appears to KPGFootball to have the build, base, core strength, and pad level to play strong tackle in Coach LaKunta Farmer’s four down alignment base front.

There is no telling how Hessler will look as he reports to Future Stars’ camp which will be at Morehead State University. By the time Hesler reports, he will have been deeply involved with both the Mason County High School’s summer strength & conditioning program together with its varsity summer drill and position work. I would expect Hesler will be a candidate, as most the 8th grade Team Kentucky players turn out to be, for either immediate to early varsity run this next Fall. Last year’s team had three players report bench pressing between 275 pounds and 300 and squatting over 405. Those players were William Long, Cameron Willis, and Hunter Scott. The year prior to that, Team Kentucky had two players along its defensive front both benching and squatting similarly to Long, Willis, and Scott, in Taylor County’s Logan Parker and Hardin County’s Octavius Oxendine. The point is, by the time the Tennessee-Kentucky Classic rolls around, the 8th grade game isn’t being played by middle school players any longer…it is being played by high-school, varsity, two-deepers to day one starters. We expect the same to be true of players like Jacoby Thornsbury, William Hughes, and, of course, Jayven Hesler.