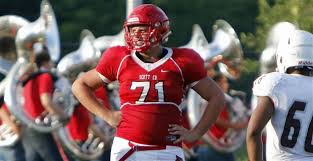 Parents ask us at Kentucky Prep Gridiron all the time to which combines should I be taking my son if I hope to get him to college on football scholarship and in what type of physical tests should he be gaining proficiency. We have before discussed the types of combines and camps in For What Should Parents Look in Picking a Football Camp, published on this site May 28, 2017. Today we are going to use one of Kentucky’s top 2019 prospects, Bryan Hudson from Georgetown, Kentucky, for demonstrative purposes. Bryan is regarded by Rivals.com as the 3rd highest regarded prospect in Kentucky in the 2019 class and the 26th best Tackle Prospect in the nation for 2019 so he isn’t fairing too poorly in our estimation.

Bryan, who has a 3.8 GPA and holds 8 National Titles in shot and discus in Track & Field, is a tackle listed at 6’4″ and 290 pounds who runs the 40 in 5.6 and Shuttles in 4.94. His vertical is 25.3 and his kneeling power ball toss is 44 feet. Here’s what that demonstrates according to topendsports.com (http://www.topendsports.com/sport/gridiron/football-sparq.htm).

The Tests which contribute to a SPARQ (Speed, Power, Agility, Reaction, and Quickness) rating are as follows:

The 40 yard dash: This test has been relied upon almost since the dawn of football. One might wonder from where the 40 yard distance originated. Well, the origin of timing football players for 40 yards comes from the average distance of a punt and the time it takes to reach that distance. See, MacCambridge, Michael (2005). America’s Game: The Epic Story of How Pro Football Captured a Nation (1st ed.). New York: Anchor Books. p. 29. Punts average around 40 yards in distance from the line of scrimmage, and the hangtime (time of flight) averages approximately 4.5 seconds. Therefore, if a coach knows that a player runs 40 yards in 4.5 seconds, he will be able to leave the line of scrimmage when a punt is kicked, and reach the point where the ball comes down just as it arrives. The 40 yard dash is considered to measure acceleration and is a reliable indicator of speed, agility, quickness. High School coaches will tell you all the time they don’t care what their players run in the 40 especially the O-line coach. Colleges and the NFL, well, they care!

The Pro-Shuttle– The Pro-Shuttle is also referred to as the 5-10-5 Agility. It also is referenced as the 20 yard agility and the pro-agility shuttle and is a lateral movement test that measures the agility of the athlete, especially body control and change of direction.

Kneeling Power Ball Toss– This test has replaced, at many recruiting combines, the Bench Press repetitions which for High School were performed at 185 pounds and for the NFL combine were performed at 225 pounds. This test is considered a measure of upper body strength and power. The test which isn’t familiar to all athletes, is performed as follows: The athlete starts in a kneeling position with the back erect and facing the direction they are going to throw. The thighs should be parallel and the knees at the start line. Ensure that the toes are pointed backwards, as curled up toes can be used for greater traction. Starting with the ball grasped with both hands at the sides, and held out and above the head. The ball is brought down to the chest as they hips are brought back to the heels, then in one motion the ball is pushed forward and up (optimally between 30-45 degrees). A practice trial is allowed to learn the correct movements and get the best trajectory for maximum distance. They must not throw favoring one arm or rotate about the spine. The athlete is permitted to fall forwards over the line after the ball is released. The knees are not to leave the ground. Two attempts are allowed, with at least 45 seconds recovery between each throw. I would get a medicine ball with which to practice weighing 3 kilograms or 6.61387 pounds (or 7 pounds) because the male athletes use that weight and the youth generally use the 2 kilogram power ball. Either way, the ball at the combine should feel a little light if you regularly use a 7 pounder for instance regardless of your age.

Vertical Jump– We here at Kentucky Prep Gridiron have told you that many scouts relate vertical jumping ability with speed. The Vertical is now part of the SPARQ rating system as the athlete, standing on a digital jump mat preferably, jumps for maximum height. This test measures explosiveness and is considered a reliable indicator of speed. This test is most commonly performed with the athlete jumping vertically as high as possible using both arms and legs to assist in projecting the body upwards (this method uses the countermovement technique). The athlete then lands back on the mat with both feet landing at the same time. A score of the time in the air, and the calculated vertical jump height is then given. Height can be calculated using this formula: jump height = 4.9 x (0.5 x Time)^2 ). The best score of at least three attempts is recorded. The tester should allow good rest of approximately 2 minutes between trials to permit the athlete’s optimal performance.

Coming back full circle to Bryan Hudson, taking all of the tests into account (his 5.64 40, 4.94 shuttle, 25.3 inch vertical jump, and 44 foot kneeling power ball toss) Hudson has a SPARQ rating of 82.2. Is that good? Well, Alabama, Kentucky, Florida, LSU and the Ohio State University all think so because they have offered the Commonwealth’s number 3 prospect. If you want to know on what to work to gain proficiency to enable your athlete to get noticed and offered, the above physical feats would appear to us to be a beginning.