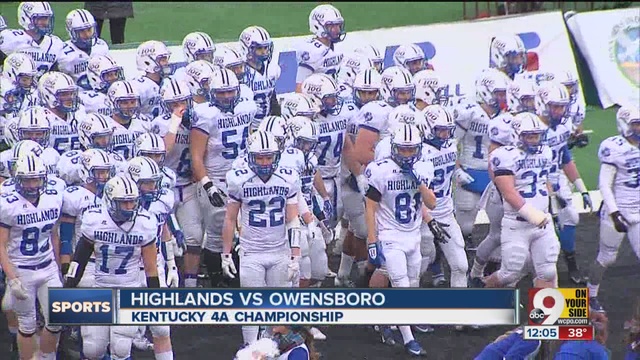 Willie Nelson, a.k.a. The Red Headed Stranger, once penned a song entitled Blue Skies in which he wrote…Blue birds singin’ a song/Nothin’ but blue skies from now on…I have no idea the motivation of Shotgun Willie in writing and then cutting a huge hit with those lyrics. There are two things I do know; I love the song, and, if the Fort Thomas Highlands Bluebirds were the bluebirds he meant to reference in the lyrics, there really have been nothing but blue skies from now on…or at least from the Roaring 20s to the present day.

The Bluebirds from Highlands were The Blue Devil until the 1920s when, rumor and legend relate, a local clergyman objected to the association of the community to the devil, blue or any color. It is further part of local Campbell County folklore that, when attempting to arrive at a more agreeable mascot for Highlands High School, the boys’ track team was having an exceptional year. It was said they flew like birds and, from there, the mascot became the Bluebirds. All that can be certainly said for sure is since Highlands became the Bluebirds,

it has been pretty smooth sailing ever since. Highland High School was founded in 1888 and took its name from the original Fort Thomas, The Highlands. The actual building which would come to house Highlands High School initially was built in 1802.

Coach Dale Mueller coached the Bluebirds 20 of those years compiling a 250-36 record over that span with an 11-3 record just in State Championship games. That comes out to winning 12 and 1/2 games a year as a Head Coach over a 20 year period. Mueller, himself a graduate of The Cornell University (perhaps you’ve heard of it), coached 9 years prior to becoming the Head Coach at Highlands and over his 29 years compiled a record of 309-67. Pardon the pun, but it would certainly appear Mueller, who also taught Chemistry at Highlands High School, had the right formula for winning both games and Championships.

Borrowing once again from Willie Nelson’s song Blue Skies, the people in Fort Thomas, Kentucky would have to agree that for much of its football history, the Bluebirds have…never [seen] the sun shinin’ so bright/Never saw things goin’ so right…That is why the Bluebird faithful haven’t hit the panic button going 3-8 just last season. There are hills and there are valleys in the history of any team which has survived the test of time. The key is to have way more hills than valleys. That is certainly the case in Fort Thomas, Kentucky.