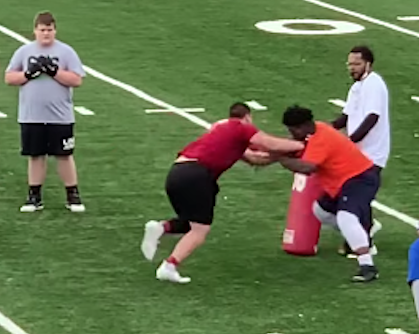 Here’s what they are evaluating

It may not be the traits you would want…but it is what it is!

As many of you who follow KPGFootball know, Fletcher Long, before taking a job with the Jackson Times-Voice newspaper, was a major contributor over here with us. He writes an editorial entitled “The Long Version,” where he waxes eloquently on a variety of topics.

This week he decided to open his treasure-trove of knowledge on the recruiting game. We enjoyed reading the article and asked him if we could re-publish it over here on our site. He has graciously allowed us.

Edwin Weathersby is the college football recruiting analyst for Bleacher Report, a national website focused on sport and sports culture. Bleacher Report’s headquarters are in San Francisco, with offices in New York City and London.

Bleacher Report was acquired by Turner Broadcasting System in August 2012 for $175 million. Yeah, its a “Big Boy” in the recruiting game.

Weathersby has worked in scouting/player personnel departments for three professional football teams. The New York Giants and the Cleveland Browns were two of them.

I happen to know quite a bit about the college recruiting game. I read a very informative article by Mr. Weathersby which made me wonder whether I knew even more than I wanted to know.

We have quite a few young men around Breathitt County camping for different college programs this summer and hitting the combine circuit. I thought I might inform both their families and them about the eight-traits that Edwin Weathersby and I have both noted coaches want to see from recruits. While I am telling them, I just as well should tell all of you.

Before we continue down this path, we want to mention to some of the dads out there the game has changed from when many of them played and were, themselves, getting recruited. Live games and film were once the main avenues for coaches to evaluate players. Now, I wonder if they even draw any curiosity.

College programs host camps during the offseason. Some of these camps are “vital platforms,” as Mr. Weathersby tells the reader in his article published to Bleacher Report in July of 2013 entitled, “8 Traits Coaches Must See from Recruits at College Football Camps.”

There are camps where any young football player can attend. These are referred to as “skill-development” camps.

You will not be offered here. The school hosting these are not evaluating prospects but merely making money and furthering its communal good-will while marketing its brand.

Programs also host invite-only, “prospect camps.” Some schools hold these camps without fanfare or advertisement. Some, still, are held in secret. Coaches hold these camps for the “top prospects” the staff wants to evaluate, up close and personally.

Learn the difference between the two types. Attending a “skill-development camp” and posting you hope your son gets offered makes you look foolish.

A recruit may come to a “prospect camp” without an offer and leave committed. Of course, they will have to perform well in front of the staff, but it happens.

To be offered the recruit has to exhibit exceptional specific traits. The below are those traits according to Edwin Weathersby and me.

Number one: Size and Body Type

First of all, I would like you to notice where this trait ranks. Size is the first thing coaches evaluate at every position on the field.

Coaches enter camp with a list of sizes for prospects set to attend. They use the camp to determine if the prospect’s reported size matches their actual height and weight.

This is done with every position group, even kickers and punters. Coaches also evaluate “body type.”

If a lineman is 6-5, 300-pounds, how does he wear his 300-pounds? Is he soft and doughy or is he lean at that weight? These kids they are evaluating are teenagers with body types which change dramatically when they get in a college weight program.

College coaches believe their weight program will turn anyone into a monster. So they are looking for more of a framework here than a finished product.

Coaches try to size-up something they call growth potential. Growth potential is taking a prospect as he presents and attempting to predict how differently that same prospect may appear after the college strength coach gets ahold of him.

Some prospects peak physically in high school. Others don’t finish developing until they are well into college.

As noted in the Weathersby article, the college game is much faster than the game played in high school. Coaches have to determine whether the prospect can ever play the game at the speed required in college.

Play speed is demonstrated during drill work at the college camps. The coaches want to see if the prospect can move at an elite pace.

This will be a revelation for some of your camp/combine attendees out there. Some of you dog-it through the drills and save it up for one-on-ones, the 40, the short shuttle, the L-cone, and other parts of the camp you believe to be more vital. Don’t dog it through the drill work!

QB’s must move quickly in their drops. RBs must display burst running past cones. Linemen must exhibit explosiveness at the snap. Prospects who look too fast for their high-school peer group are the players who may fit in with a certain college coach’s team.

College camps are in shorts and shirts. There used to be full-contact, prospect camps back in the day but those have become rare to extinct. I smell increased insurance premiums to underwrite such camps as the likely culprit.

Prospects are playing in “more space” unpadded than they would be padded. Coaches can’t get a sense of the kid’s toughness and physicality at camp; but, they can get a feel for the prospect’s athleticism.

LBs and DBs will be evaluated dropping into coverage. This will exhibit their pass-drops, cover awareness, transition quickness, and ball skills.

A big and physical TE must show he can fire out of his stance into a route, sink his hips, and get quickly out of his break. OL will have their athletic ability evaluated by performing pull and trap drills along with one on ones. DLs are drilled to determine their speed when they “change direction in space.”

“Athletes” and athleticism are evaluated by the ability to play in space. Playing in space is evaluated by change of direction speed and quickness and transitioning in and out of breaks. A 40-yard dash tests few to none of these skills and isn’t thought of as a great indicator of athleticism, though it does test linear speed.

How many of you are surprised this attribute is evaluated so far down this list? Well, we may have some more surprises for you. It isn’t too important.

Coaches want to evaluate it. However, for the prospect lacking it, these same coaches know it can be developed once the prospect gets to college and gets in the program’s training regimen.

Strength coaches consistently tell head coaches for whom they work they can make any player a monster. So, if the prospect is not “overly strong,” that is not a huge deal (to any of them). Coaches will use camp “to get a feel” for where a player is “strength-wise,” but won’t use “strength level” as the determining factor concerning whether or not to “offer.”

When putting prospects through drills, a coach will give him instruction. If you have ever attended a combine/camp, you have seen this. How the prospect receives instruction is important.

Does the prospect do as told? Does he continue to do those things he was told not to do?

Coaches are looking for coachable prospects. They want kids who want to learn and want to master the craft of playing where deployed.

A hot-shot may come to camp thinking their footwork is “fine” but the coach may think his base is too wide or narrow. How the coach’s correction is received by the player and then applied to the next rep demonstrates whether the kid is coachable. It could be key, depending on the staff doing the evaluating, as to whether the program wants that prospect to sign.

Camps have 7 on 7s, one on ones, QB competitions, athletic testing, timing and other areas where the campers will be asked to compete. A prospect needs to show he is a competitor.

If a lineman loses a one on one, how does he respond? Does he sulk? Does he quit? Those would be unfavorable attributes.

Does he demand a rematch? Doing this is favorable and could be a boon to getting offered.

If a QB loses an arm strength drill does he come back and compete in the accuracy competition? Football is competitive. If a coach notices a kid isn’t a fierce competitor, this will be a concern.

Does the prospect talk trash? Is he vocal and brash? There are positions where a prospect should be assertive.

Does he rarely speak? Is he shy? These attributes, though prized at times in society, may not be recruiting to a sport dominated by Class A-personality types.

If you are getting all bent out of shape about whether statistics are getting accurately recorded or whether your son has made All-District, you are fretting over very minor details. College evaluators are NOT too concerned about it.

Maybe you shouldn’t be either. After-all, they are the ones “stroking the checks.”

This is Fletcher Long and you can take this for whatever you find it worth, but those are the facts and THAT’S THE LONG VERSION!