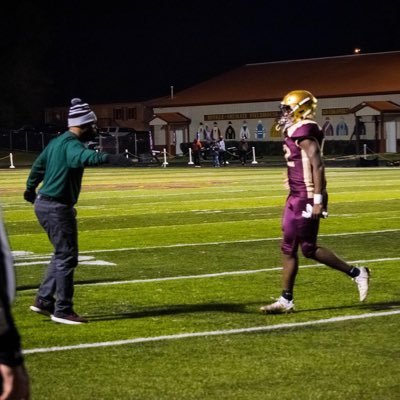 Let’s get one thing right out of the way; Cam’ron Boatwright and Cam’ron Goodwin are one and the same. When he was “Boatwright,” Cam’ron lived in Atlanta, Georgia.

Cam’ron was adopted by Jay Goodwin, who owns a horse farm in the area. Fun fact-Jay Goodwin’s father was a coaching legend in Louisiana. Cam’ron and Jay met through Church and through family members who interacted via Church.

Now that we have that all straight, let’s get one more thing straight. Cam’ron Goodwin is a straight-stud of a ’23 prospect at linebacker and a “break-out” phenom for the upcoming Fall.

Goodwin is 6-2 and weighs northward of two-bills (205-pounds is his weight according to Coach Jones). Goodwin will weigh around 215-pounds by Fall camp, is our guess. Goodwin hits like a jack-hammer.

There were a couple of plays with him on kick return where he hit hit would be tacklers so hard when they reached him we winced. We actually felt sorry for those kids. He rung our bells and we were just watching the film.

He’s listed as a RB/TE/ATH on his Hudl page. He looked like a linebacker to us at KPGFootball. Linebackers are born. Linebackers want to collide. A linebacker is liable to hurt you when your getting water in the half-time locker room. That appears to be this kid.

We talked to his head coach at Bourbon County, Dave Jones. He seemed to agree that the prospects position, at least next level, would be linebacker.

Jones told KPGFootball about his prized, break-out player, “Goodwin is going to be one of the top linebackers in the ’23 class. He’s a head-hunter. That position calls for that skill-set.”

Goodwin had 82-tackles as a sophomore. That is splendid for sophomore production where a player gets an entire season. Bourbon County played 8-games in the COVID-shortened ’20 season.

Goodwin played in only 7 as he got ejected for hitting too hard. We’re not kidding that is what the official said to Jones when ejecting him. Projecting a full season, he’s well over 100-tackles playing 4A football in the same district as Boyle County and Lexington Catholic even with the Colonels bowing out round-one.

Sports are in the Goodwin family tree. Jay Goodwin was a football star out of Louisiana. Goodwin’s oldest daughter is going to Georgia State for softball on a full ride. His middle daughter is thought to be the top softball player in the Bluegrass and is committed to Georgia.

Jay Goodwin’s youngest daughter is said to be the best of them all. She’s an 8th-grader, playing high school basketball.

This is a freak of a linebacker who will take off like a rocket-ship in our estimation his junior year. He’s been invited to some big-time combines so he will get the chance to “show what he can do” on big stages this offseason.