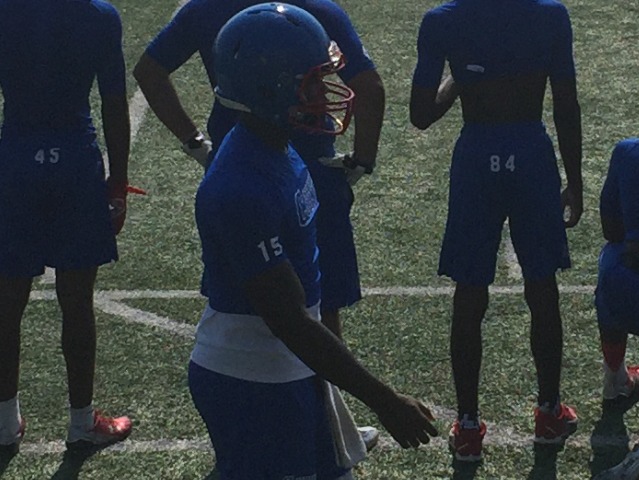 What do you do if you are stuck behind the Leaf-Chronicle‘s All Area Football Offensive Player of the Year in QB, Heath Williams, on the Northeast High School depth chart in Clarksville, Tennessee? Well, one thing you can do is move to Hopkinsville, Kentucky and enroll at Christian County High School and compete for its QB vacancy. At least that is the course of action which it seems J’lin Powell (Class of 2020) decided he would undertake for the coming 2018 high school football season.

Last year at Northeast, J’lin Powell didn’t attempt a pass in a varsity football game. He is also listed as a TE but he didn’t catch a pass in a varsity football game either. In varsity action, he didn’t have a carry, and it doesn’t appear he contributed defensively. On the other hand, Heath Williams, Class of 2019, threw for 2,372 passing yards with 149 completions out of 236 attempts for a .631 completion percentage. Williams also threw 29 passing TDs in 11 games in 2017 and gained 193 yards rushing all of which contributed to his having the highest QB Rating in Clarksville at 118.5. So, how does one unseat a quarterback like that? Well, why would one even undertake an attempt when there is a perfectly good job down the road at a tradition-rich, Kentucky Class 5A, district 1 football power.

Meanwhile, what about Christian County‘s heir apparent whom has waited his turn for an opportunity playing behind the now graduated, record-setting QB from a year ago (Kolbe Langhi). Langhi a four year starter at CCHS exhausted his high school eligibility and is presently on the University of Kentucky’s football roster. The guy who patiently bided his time is Donta Abren. Abren‘s limited performance in mop up duty a year ago was nice. Abren completed 6 of his 9 passing attempts in varsity action, while taking virtually every JV snap from center. Abren, in the varsity run, threw for 129 yards with 3 passing TDs against his being intercepted twice. Abren carried the ball 4 times, a year ago, for 18 yards rushing. While Abren has a slight statistical advantage, the physical edge, or the eye-ball test, is decidedly in favor of the new guy. Abren is listed on the Christian County roster as being 5-9 and weighing 155 pounds. He may be a bit taller and thicker than that but those measurements are fairly accurate. J’lin Powell is every bit as statuesque as the 6-2, 205 pounds he is listed as being on the Northeast active roster posted over on MaxPreps.

I have a friend on the high school staff at Northeast, who incidentally has confirmed the rumored transfer (as if my picture of him appended to this feature isn’t enough). This coach, who didn’t want to be identified as a source for this article, said the following about Powell…He would have gotten the keys to the offense, next year. It is doubtful J’lin would have beaten out Heath Williams, though it would have been nice to have him in case of Williams being injured. We wanted Powell to stick around because we believed he had the potential to be another Heath Williams, slightly deficient in some ways but improved in others. I asked if the coach couldn’t be a bit more specific about the comparison, as obviously, the two of them (Williams/Powell) were similar in height and weight. What he told me was…Powell is a big body athlete who may not be the passer Heath Williams is but he isn’t too shabby at throwing it either. J’lin is faster than Williams and has more “shake” and mobility.  Powell reports a bench press in the neighborhood of 235 pounds and a back-squat in the neighborhood of 300 pounds.

What it means for the Colonels: I want to begin by saying that I like what Donta Abren has to give at the QB position and there is no guarantee Powell can win the job from him. I know I haven’t ranked Christian County in my 2018, preseason, 5A poll, in spite of their going 11-1 in 2017, but that has more to do with their losing 17 starters off the 2017 team to graduation (and three to four more to transfer) and much less to do with any perceived deficiency at the QB position. Last year, the Colonels got over 2,000 total yards and 21 TDs, rushing and passing, out of the QB position alone, which is a lot to replace. At KPGFootball, we believe Powell potentially gives the Colonels a big-bodied athlete who can scramble his way out of trouble and gain tough yards for the offense much like Langhi did for them last year. I know Coach Lovelace has got to be excited about this turn of events and I do believe Powell has a better chance of winning the QB job at CCHS than attempting to unseat a healthy Heath Williams.