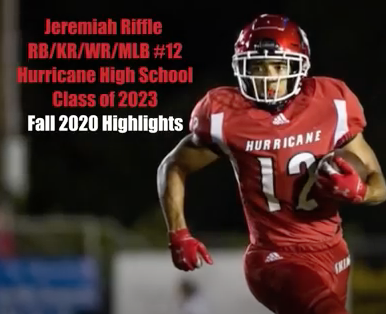 Talk about your “Rich getting Richer” scenarios, West Virginia’s Jeremiah Riffle has moved to central Kentucky and has enrolled at Lexington Christian Academy. This is a huge pickup for an already loaded roster. How can this roster get any better?

Powell was familiar with Riffle. He told us the young man was a player of note believed to be “on the come-up” in the West Virginia high-school ranks.

We couldn’t find any statistics for him as a Redskin in WV. However, we found some Youtube.com footage showing him displaying a wide variety of skills.

We have linked that video for you under the picture to the right. If you have these guys on the ’21 schedule, it should be required viewing.

Riffle was prominently used in the return game, which we expect he may be similarly used by LCA. Riffle was electric out of the backfield, breaking and ripping off long runs from scrimmage, in Hurricane High’s one-back, Spread-offensive set similar to what LCA employs. Riffle even made plays defensively at LB. We viewed plays of Riffle attacking, down-hill, and pursuing and using his closing speed to catch plays run to the opposite side of where he was aligned.

Now, we haven’t asked anyone on the staff, but LCA having the finest linebacker’s corp in the commonwealth makes it dubious to doubtful he has come to the Lexington area to play in LCA’s defensive second level. We believe he will play RB for the Eagles, though we won’t rule out his playing some in the slot or even out-wide, at receiver, opposite Moore.

This class of ’23 prospect has some enviable tools in the tool-box. He is 6-1 and weighs 210-pounds for starters.

Riffle runs the 3-cone in 6.94-seconds, shuttles in 4.3-seconds, broad jumps 10-feet, and has a vertical of 32-inches. His reported 40-yard dash time is 4.56-seconds. His film would indicate the 40-speed being accurate, unless WV high school football is inordinately slow, which I have neither before heard nor personally witnessed.

Particularly important, both for his future recruitment and his matriculation at LCA, Riffle carries a 4.0 GPA. We are going to keep saying it. With the transfer portal being as it now and with all the players nationally available and able to play collegiately, recruits are going to have to differentiate themselves from the competition.

How many running-backs, this same size and running in the neighborhood of 4.6, are trying to play D-1 football? Tens of thousands would be our guess, nationally.

How many of them carry 4.0 GPAs? Bingo, that will cut that national number down to the hundreds, if not lower.

The question often asked us at the magazine by college recruiters is, “We have thousands of prospects we are reviewing with the same numbers as your guy. Why should we recruit him instead of the others?”

The answer we give for students like Riffle? “Our guy will easily gain admission and won’t be a perpetual eligibility hassle!” Works almost every time.