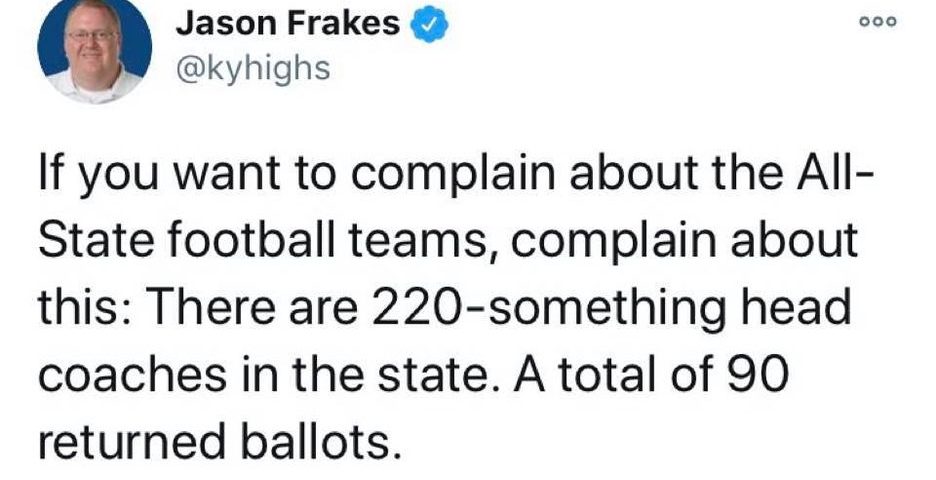 Yesterday, the coach’s all-state football team was announced and published in the Courier-Journal. Jason Frakes is the Sports Editor of what is the commonwealth’s largest circulated periodical (we believe though Lexington’s Herald-Leader may dispute this) and his name was on the article’s by-line, therefore he drew the criticism.

This article isn’t meant to provide cover for Mr. Frakes. He’s a big-boy and can take care of himself.

One doesn’t become Sports Editor of the Courier-Journal without some pretty thick skin. In fact, it is a job requisite.

That is why I found his Tweet, attached as the featured photograph to this particular article, so interesting. Frakes said, “If you want to complain…There are 220-something head coaches in the state. A total of 90 returned ballots.”

Well, by my count, there are 223-head football coaches in Kentucky. Ninety (90) of them voting in the coach’s all-state ballot roughly computes to 40% of the eligible voters. That is, simply, indefensible.

We don’t take requests too often at the magazine. However, we got a call from a football parent in the western end of Kentucky who formerly starred for a commonwealth, Division I, college football team, back in the day.

He was outraged by Mr. Frakes’ revelation. You mean to tell me these head football coaches are out here preaching to our sons about commitment, responsibility, ‘doing one’s job;’ and they aren’t doing or showing any of the above when it is time to actually do something for these kids which isn’t to their direct benefit? Now, that is an article you should publish right there!

First of all, I want to say on behalf of Kentucky Prep Gridiron, we have no dog in this fight. We are voting members of the Associated Press’s all-state football team and weekly top-10 polls in football. Our record of voting, we are sure the AP would tell you, is impeccable.

In full disclosure, we are eligible to vote on high school basketball but rarely do. We don’t cover basketball. We made it clear to the AP, when we were granted our privilege of a vote, we would only be voting during the high school football season.

That was the deal cut, when the deal was made, and we have upheld our end (we would submit) flawlessly. We haven’t missed a single vote. We won’t either.

The privilege of a vote is an honor. When we took it on, it became our duty to the sport we love, to our readers, to our subscribers, and to the players we cover.

However, dog in the fight or not, it is indefensible 60% of the coaches empowered to vote failed to take the 30-minutes or so it would have required to fill out and return a ballot. We are assuming the Courier-Journal sent every coach eligible a ballot, as has been its custom. Mr. Frakes’ social media posting suggests it did.

If you are claiming to not have received one, that wold constitute absolution. Assuming you got a ballot and you just trashed it or never opened it, that is another matter.

You ballot-getters who couldn’t find the time to fill it out and return it have let down high school players in your district. You have further victimized district-wide seniors who have had plenty taken from them already. The next time you want to get all preachy about doing one’s job, it would be pretty humorous if the player scolded responded with I’ll do my job when you do yours.

You have no right to demand commitment and selflessness where you are lazy and self-absorbed. You are supposed to be a leader, Coach; that means leading with your example and not just words.

It may not matter to you whether some kid can springboard post-season accolades into an opportunity to gain a paid-for education playing football in college. However, it sure as Hell matters to him. It matters to the kid’s family.

These kids have sweated for you, bled for you, trained in and off-season for you, and lapped up every message you have imparted. They have toughed-out injuries and played hurt for you so you could put another notch on the left side of the won-loss accounting ledger. Their efforts have underpinned every win you have enjoyed, have gotten you better jobs and higher pay, and won for you every championship you have put on the career résumé. Don’t you have 30-minutes for them?

Another thing which invited comment was some of the curious selections to the team. We decline to comment on this. Why? It is inappropriate.

It is against the magazine’s policy to criticize amateur athletes, especially where they are high school students. Coaches are fair game.

Coaches are grown and paid for what they do. The working media is not shielded from criticism (more like, subjected to it on a daily basis) and neither are high school coaches (nor should they be).

Coaching, like Sports Editor, is a public position. Criticism comes with the title.

A coach actually said to us one time, about a kid who had made first-team all-state a few years back, the following: You know that kid isn’t an all-stater. You know that kid is a fraud. We didn’t know anything of the sort and had voted for this particular kid. Needless to say, we couldn’t have been anymore in disagreement.

That coach is lucky we didn’t use our very public forum to out him for that comment. Had we, we are sure he would have lied, deflected, or just spun-it into our being the bad guys. That’s what guys like that do.

We tell anyone who wants to opine about this kid or that not being deserving to be on any postseason team the same thing we told that coach on that day. The only criteria to make an all-anything team is to get more votes than the other nominees.

The kids on the coach’s all-state team published yesterday got the most votes. Therefore, they are deserving, regardless of what they did (or in your opinion, didn’t do) on the field on Friday nights.

Mr. Frakes is exactly right. If you don’t think the team is an adequate reflection of the high school game’s best players, the fault lies with the voters. For the parents who said on-line, these teams are all politics, we say, Duh!