In 1947 a woman named Mary Frances Gerety copyrighted the phrase A Diamond is Forever while working on a slogan for the popular diamond sellers De Beers Consolidated Mines Ltd. It was a slogan meant to highlight the rare quality and value of the diamond as a gem stone and to make a man, having just purchased a diamond for his fiancé, feel less remorse about having just contributed so much of his present liquidity to buying one for his betrothed. Diamonds are rare indeed; but, then again, so are quality nose guards.

Diamond Glover is a Junior (2019) Zero Technique guy who fills the Nose Guard position in the middle of the Owensboro Red Devil defensive alignment. He is a problem for opposing offenses and a player around whom teams have to game plan. At 6’0″ 265 pounds he is built low to the ground and difficult for Centers to either overtake or against whom to gain any type of leverage. He benched 305 as a sophomore and back squatted 475 with a Power Clean of 270, which are fantastic strength and explosion numbers for a sophomore. I don’t have numbers for Glover which are recent but it is safe to say he is considerably stronger. Glover has a reported 40 time of 5.24 (again as a sophomore) and is sufficiently fast to warrant playing time at fullback when he gets offensive snaps. Glover has really quick hands and get-off burst and is capable of both penetrating into the backfield and blowing up the run game or scraping down the line of scrimmage and getting to plays laterally one generally doesn’t expect from a NG. 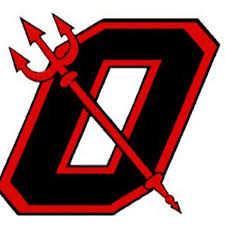 I can assure you Glover has gotten the attention of Christian County’s OC, Rusty Goble whose Colonel team plays the Red Devils September 29, 2017 in Owensboro, Kentucky. Coach Goble, when reached, had this to say, When watching film of the Red Devil defense, obviously Diamond jumps off the screen. Glover is super quick with really good range and uses his hands well. To have success against the Devil front, as a coordinator, you have to find where he is aligned, tackle or nose. Glover runs very well to the ball. Really, the Devil defensive front is a tough match-up for any offensive line with the Weaver kid who moved to DE at the beginning of the season and Cowherd, who returned to play the opposite DE. When healthy and accounted for, the Devils have been tough against the run this year so Friday night, we will see strength on strength as they are good at stopping what we are really good at doing.

Now, the nose tackle is a position which can’t be merely graded by viewing the stat sheet. As James Dudko noted in his article, Ranking the 10 Best Nose Tackles, written about players at that position in the NFL, [b]y its nature, nose tackle is one of the most unheralded and selfless positions in the NFL…[T]he position has taken on greater significance thanks to the proliferation of 3-4 fronts. The most common requirement of a nose tackle is to sacrifice themselves for the greater good of the rest of the defense. Occupying multiple blockers and creating lanes of pursuit for fellow defenders is the weekly requirement of a nose tackle, regardless of system. For many defenses the nose tackle’s performance is the most critical element of the scheme. All of that aside, Owensboro has found, in Glover, a Nose Guard who, not only sacrifices himself for the greater good of the defense by drawing multiple blockers, but also a NG capable of whipping those multiple blockers and making plays in the middle of the line, and even down the line, himself. In that way, Owensboro High School has found something, in Glover, even more rare and precious than a precious and extremely expensive gemstone. Or, at least, that is our take…

This if Fletcher Long, reporting for Kentucky Prep Gridiron, reminding you to PLAY THROUGH THE WHISTLE!