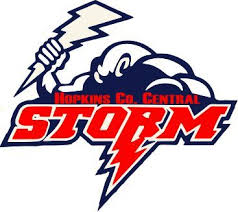 Head coach, Stephen Wood‘s storm went 2-9 last season, and truth be told, it has been storming on the Hopkins County Central football program for some time now. In the five years leading up to 2017, according to MaxPreps, The Storm compiled a 6-48 record going winless in 2012, 13, and 14, before going 2-9 in 2015, and 4-7 in 2016. In 2017, The Storm slipped back to 2-9 but lost very close games to Todd County Central (6-0) and to Muhlenberg County (21-15). Often, players on teams which perform poorly can get overlooked which is a huge mistake. The fact is there are very good football players playing across Kentucky on teams which don’t fare too well. We at Kentucky Prep Gridiron  believe Cyrus Kington is one of the best middle linebackers in the entire Class 4A classification, whose extraordinary performances tend to get lost in the shuffle of the team’s final scores and on-field results of his team.

Kington, who is 6-0 tall with a 70 inch wingspan, weighs in the neighborhood of 230 pounds (he weighed 230.4 at the State Powerlifting Meet this past Spring). Cyrus is strong, powerful, and explosive and his power numbers corroborate all of this information. Cyrus, who finished 5th in the 235 pound weight class at the State Powerlifting Meet, one of Powerlifting’s toughest weight classes, bench presses over 300 pounds and power cleans over 265. Now, at the powerlifting meet in March of 2017, Kington benched 295 pounds and power cleaned 265 for a combined lift of 560. With teams all across Kentucky fully engage in Fall preparation, which includes Summer Strength & Conditioning, we are willing to wager both of those numbers are even higher now. Now, before everybody tells me their favorite story about how being an accomplished powerlifter doesn’t make you a football player, Cyrus Kington has shown, without question, that he is definitely a football player.

Kington, in 2016, broke his team’s record for tackles in a season with 114. He followed up his sophomore with 93 tackles as a junior, 60 of which he didn’t even need help, 2 QB sacks, and numerous hurries and tackles for loss. Remember, he may well have slipped up on the district as a sophomore but last year, both his brother and he, principally dominated the scouting report of every single team The Storm faced.

Now Hopkins County Central has to figure out a way to get in the win column with more regularity and this next season will not be an easy time to realize the improvement. The Storm is in the same district with Logan County, Madisonville North-Hopkins, and Hopkinsville High School who all look to be as good as any of them have been in a while. In the case of Logan County, they are better than they have ever been. Todd Adler has the Cougars both rolling and roaring. Therefore, the task of improving very much has never been a more daunting and seemingly impossible task than it appears at present. All of the team’s prospects aside, Cyrus Kington can play the game, is a perfect size for where he projects to play at the next level, and is someone who is an FCS, division 1, football player or even higher.