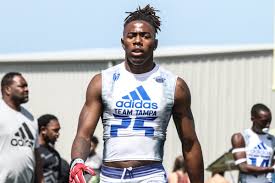 I will never forget my dad, the consummate pragmatist, sitting me down, worried, about me starting a publication which only covered the Fall sport of football. What are you going to do the rest of the year? It was an entirely fair question. Obviously, it was a question from someone who was unaware of just how year round the sport of Football has become. According to an ESPN article, written by staff writer Chantel Jennings http://www.espn.com/college-sports/recruiting/football/story/_/id/8884256/college-football-recruiting-leans-7-7-leagues, it was a question which plagued all of football across the nation. What are football people to do the portions of a year in which there isn’t football being played? I mean, what is Kentucky Prep Gridiron supposed to cover the seasons of the year other than the Fall? Well, how about a little coverage of Sevens!

Coaches, in my circle of association, refer to Sevens Season. What in the heck is that you might ask? According to the article, the link to which I have included, Football players, history tells us, needed more than 10 or so games a season to develop at the same rate as athletes in other sports. Soccer had travel leagues, Basketball had AAU, Baseball players had both summer and fall leagues, but what about Football? No one can expect them to hit all year long…so, Sevens was born. Sevens is more commonly referred to as 7 on 7 passing league. In Texas, I have learned, high school coaches organize school teams which are run by fathers and which have high schools playing against each other without any out-of-state competition. The sport is considered necessary for skill development. Andrew Luck, Robert Griffin III, and Matthew Stafford all were Lone Star QBs who have attributed at least some of their development to Texas Sevens.  If you’re doing 7-on-7, that means you’re doing something in the summer for your kids, and that’s great, said Dick Olin, often considered the founder of Texas 7-on-7. That’s why we did it. We had our center snap the ball, we had our running backs, our receivers, our quarterback. We worked our defense, we worked our offense all summer. Jennings, ESPN, College Football leans on 7 on 7 leagues.

College recruiters are flocking to the top-shelf Sevens play. B2G Elite founded by former college  football players Ron Allen and Henry Bell report, in the past few years, these Sevens tournaments have become one-stop shops for college coaches. Unlike a high school, in which a college coach can inquire about two, maybe three players, all-star teams can include 15-20 players in which any given coach might have interest. Allen and Bell were asked how many Division-I scholarship offers their top 7-on-7 teams picked up during a Sevens season and they responded almost 200.

Former Michigan coach Lloyd Carr considered Sevens an invaluable tool in evaluating talent, so much so that he implemented them as a part of Michigan’s week-long summer camp for top prospects when coaching there, as Carr shared with Chantel Jennings in her article above linked. They’d all get a lot of work against the passing game, which I think was a great thing in terms of developing the skills of the athletes, Carr told ESPN’s Chantel Jennings. It gave all the skilled athletes the opportunity to be evaluated by the college coaches. … It became a great way for us to evaluate the kids that came to our camp.

So, I told you all this to tell you that Kentucky Prep Gridiron has been contacted about being the exclusive provider of coverage for a very prestigious Sevens team which has fielded an unbelievably talented roster of mostly Kentucky Prospects, many of whom have been before featured on this site. The time is not yet ripe to announce the name of the team as everything isn’t finalized, and if you would like KPG to cover your Sevens team too, message me and we will get together on how that can be arranged. We will chronicle a team’s involvement in its respective tournaments and feature the kids who really show out in Sevens play. We are excited about this and hope this is just one more reason for you to subscribe to and support the efforts we are making here in the Commonwealth to bring needed attention to gridiron stars who might, sans our efforts, go unnoticed.

This is Fletcher Long, reporting for Kentucky Prep Gridiron, reminding all Sevens players to both have fun and, definitely, PLAY THROUGH THE WHISTLE!