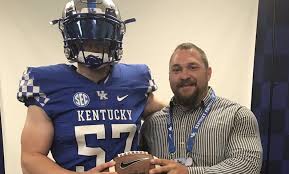 The Bobcats and Yellow Jackets will have some Kentucky footballers watching its game this coming Friday night in the KHSAA, 2A Classification’s second round of the football championship playoffs. Kentucky’s top rated DE and one of the Class of 2021’s top-rated players, Darion Dearinger, and his dad, Justin, have told KPGFootball they are coming to take in the action. Darell Keith, head coach of the class 2A, Todd County Central Rebels, and his son, Joshuah Keith, together with a top 2020-prospect in Todd County senior star, D.J. Johnson, have also told KPGFootball they will attend this coming Friday night. All of these dignitaries tell KPGFootball they are excited to watch the 2nd-round game between the Bobcats and the Yellow Jackets.

The elder Keith who has been voted the first district’s 2019 Coach of the Year in the 2A Classification by the KFCA (Kentucky Football Coach’s Association), is both a KPGFootball contributor and a coach held in high esteem in western-Kentucky. Coach Keith, who was Honorably Mentioned the AP Coach of the Year in 2018, all classes, is known for wearing a fedora-style hat while coaching similar to the houndstooth number the late Bear Bryant used to wear. His nickname, around western-Kentucky football circles, is The Cat in the Hat. His son, Joshuah, is even better known than his well-known father.

Joshuah Keith is a first-team, All-American, 8th-grade QB who lead Team Kentucky to victory, last summer over Team Tennessee in the Tennessee-Kentucky Future Stars game in spectacular fashion. Little Keith has been recognized recently by the KYMSFA as his region’s Player of the Year and is Kentucky’s top-rated, Class of 2024, football player. Keith is both a QB and Safety on defense. He is highly regarded at both positions, but particularly known as a Russell-Wilson style, dual-threat QB.

“Little Keith,” as he is called from time to time, has been laser timed in the 40-yard dash in 4.7-seconds flat. He also was timed in the 5-10-5 (pro-agility, or “short-shuttle”) in 4.0-seconds at last summer’s Appalachian Prep Combine, though only a seventh grader at the time.

The Keiths are taking DJ Johnson, on his visit to WVSU to watch the Yellow Jackets play Notre Dame college in Charleston, WV the 16th, or the morning after the game with Middlesboro. We believe the Keiths will be traveling through Jackson, Kentucky in route to take DJ Johnson on his visit to WVSU for its game Saturday with Notre Dame College. William Long and Charles Andrew “Geeny” Collins are also invited by WVSU’s football program to attend the same game with at least one of those two planning on attending.

Darion Dearinger (featured photograph) is a 6-4, 255-pound DE for class 5A, Anderson County, and is rated among Kentucky’s top players in his (or really any) graduating class. Dearinger holds numerous FBS-offers to take his game to big-time, Saturday night, football. Darion’s dad, Justin, himself a former college football player and KPGFootball contributor, has served KPGFootball on numerous selection committees for its respective All-State football teams and a resource often called upon by the staff for evaluation of Kentucky, high-school, football players.

We are sure the Bobcat faithful, and probably a Yellow-Jacket fan or two, will be willing to warmly welcome the Dearingers, Justin and Darion, Coach Darell Keith, a.k.a “The Cat in the Hat,” DJ Johnson, and Joshuah Keith (Class of 2024) as they take in the game to be played this Friday night. Welcome guys, enjoy the unparalleled festivities that is Bobcat football on the Riverbank in the Holcomb Athletic Complex for this pivotal second round playoff game.