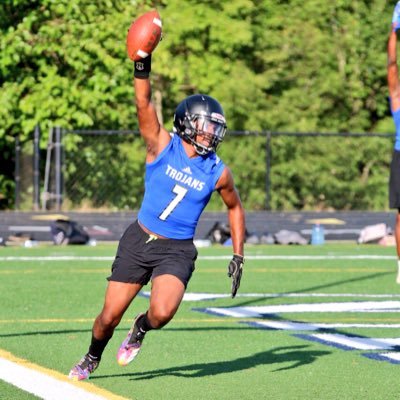 Freshman All-State Football teams are really hard to pick. First, we had the Trinity crowd on us telling us we needed to pretty much select the entire first string of the Shamrocks‘ frosh squad All-State because, after all, the only reason they weren’t playing varsity is they were at Trinity. Well, that is probably true, but Trinity is a private school which one chooses to attend. If you choose to attend Trinity, then you choose to not make the freshman team because you can’t get on the field on Friday Nights. Don’t worry, the upperclassmen have All-State teams, I am sure you can make the latter, later on in your playing career. Regardless, the freshman All-State team is really for freshmen like Justice Thompson at Ballard and Austin Gough at Owensboro. Freshmen who neither play nor produce like normal freshmen.

Then there was the case of LaVell Wright, last year, at North Hardin High School. His numbers were pretty pedestrian for an All-State team, at first glance. I mean he only gained 377 yards on 121 opportunities with 3 rushing TDs. These were varsity yards of course and these were Kentucky, Class 6A yards, but, nonetheless. He caught 13 passes for 142 receiving yards from out of the backfield. Now, as for production, one really can’t blame Wright for what appears to have been a lack of yards gained as the entire backfield only gained 624 yards over 11 games for the 2017 season. The freshman was over 60% of his entire teams’ ground production. Maybe the only freshman in Kentucky who could make that claim. Now, for those who don’t remember, LaVell made the freshman team as an athlete. Why an athlete and not a running back? Maybe because we, as a selection committee, thought he had too polished of a skill set, and was too good of a prospect, to leave off the team. This summer he has proven us somewhat prophetic.

LaVell Wright is presently holding an FBS offer to play college football, in spite of his not having attended a sophomore class at North Hardin yet. This summer the University of Alabama, Birmingham, after hosting LaVell at a camp, decided KPGFootball did know about what it was talking and pulled the trigger on this 6-0, 198 pound specimen. Now, we don’t have any idea the age of these numbers, and they may well be higher now, but Wright has a registered 40 yard dash time of 4.6 seconds, a pro-agility shuttle of 4.4 seconds, with a 425 pound back squat and a 430 pound deadlift. LaVell has a lengthy frame, with really good speed, and has a variety of positions at which he is being recruited. LaVell can play corner, safety, running back, or receiver. We could even imagine a scenario where LaVell could bulk up and align at OLB. Regardless of where he aligns, LaVell is one of the highest regarded prospects in Kentucky’s class of 2021.

As for North Hardin, the Trojans are really struggling. North Hardin went 3-8 a season ago and got dropped by Davies County, round one, at home 33-7. However, there is reason for optimism for the Trojan diehards out there as Eric Moore returns at QB for his senior campaign. Now, for the Trojans to perform markedly better, they are going to have to run the football more productively, with last year’s effort attributable to poor line play more than a lack of backfield components capable of carrying the rock. Moore is also going to have to be more efficient in the passing game as 13 interceptions, offsetting 9 TD throws, doesn’t cut it in 6A football. In addition to Moore, the Trojans also return the Class of 2020‘s, 9th overall KY prospect in the Class of 2020, and one of its best DT prospects, in AFI-KPG Sophomore, All-Stater Octavious Oxendine. Oxendine, a terrific student, is just a horse. North Hardin can’t continue to have two of the best players in the Commonwealth dotting the lineup and then go out and post 3 and 8s.

In any event, there is no question about whether LaVell Wright deserves inclusion in the finest Bluegrass football prospects in the Class of 2021. He is in the thick, and deservedly. With football prospects like Oxendine and Wright around, there certainly should be better days for the Trojans imminently on the horizon.