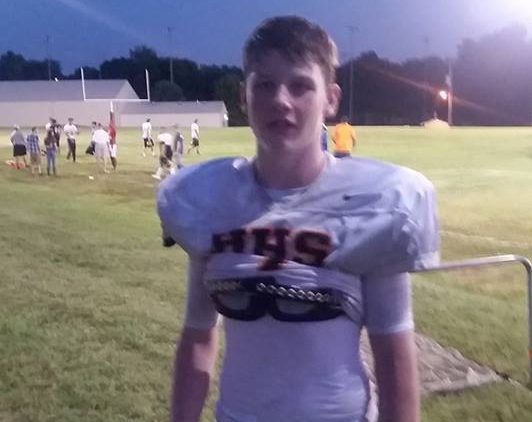 Hopkinsville High School’s incoming class of freshmen is completely loaded. The Class of 2021 is so loaded, in fact, that quite a few of them are in the starting line-up for the HHS, Varsity, right now heading into the season opener. Quite a few more are dressing Varsity and expected to contribute. As we have seen around the Commonwealth of Kentucky just last year with players like Logan Parker, Octavius Octagon, and Jordan Vaughn, all 2020 kids who came up and started Varsity for their respective High Schools as freshmen, the days of freshmen only playing freshmen ball, provided they put in the offseason preparatory work, are getting more and more scarce. That’s why it is very important for 8th grade ballers to take middle school football seriously in Kentucky these days and work on getting ready to contribute because some of them both will and often do.

Lane Freight Train Rushing is a kid in Hopkinsville, Kentucky really pushing for Varsity playing time, if not bucking to start. Lane is listed on the roster at 6’1″ 170. As I see him daily during the season he appears both to me to be a little taller and thicker than he is listed. Lane has huge, soft hands and really good speed. I am not sure his exact 40 yard dash time but I have seen him both dead-lift and back-squat well over three plates and box jump on HHS’ 60 inch high box like it’s nothing. Last year, in the Division 2, 8th Grade, State Football Semis, Rushing got loose on a screen and beat the TK Stone back four to the end zone; pulling away like they were standing still. We are confident at Kentucky Prep Gridiron Lane Rushing’s 40 time would be impressive. He is really fast and, more importantly, football fast; meaning his gearing up doesn’t slow him down at all.

Now some of you out there on the FBU and Team Kentucky Future Stars’ circuit are scratching your heads and wondering, if he is so good, where has he been? Lane only played four games at HMS last season, those four games being the season finale against Christian County Middle School, the first round play-off against Warren East, the Regional Championship against Logan County, and the State Semis against TK Stone. He was good enough to join what was then a 9-0 team and get inserted instantly into the starting lineup on both sides of the ball. He was good enough to immediately become the most explosive and even reliable target working the inside seam to go along with the edge, vertical threat HMS had in Reece Jesse. In his first game Freight Train took a slant 97 yards, for a two touchdown swing, to beat CCMS (William Long had forced and recovered a fumble for HMS at the HMS 3 yard line). In his fourth game, he took a screen 80 against TK Stone in the game’s first possession. He did all of this while becoming the team’s best OLB on defense immediately.

I have seen the Camden Williams types, the Eli Blakey types, the Nick Coates types, the Isaac Dimmock types, the Reece Jesse types, and the L’Ray Coleman types, all of whom are the class of the Commonwealth’s WRs in 2021 and I am telling you he is as good as any of them. If the kid plays more than 4 games his 8th grade year, he’s on every All-American team which isn’t bought. He’s just that good. We are confident Coach Andrew Self, the WR coach at HHS, would concur.

This last story sums up Freight Train as well as can succinctly be done. HHS is practicing the other night and Lane plucked an intermediate route out of the air thrown by Jay Bland as deftly as one plucks a fat plumb from off a fruit tree. He tucks it high and tight turns upfield where he meets a senior corner squatting to lower the boom. Rushing lowered his shoulder and trucked that young man so violently that, not only did the practice erupt, but I am not sure he didn’t take a full inch from off of the other player’s height. What is really scary about Rushing is this freshman has the frame, length, and build which indicates he isn’t close to finished getting either taller or thicker and we can easily see him turning into a 6’6″ 240 pound monster TE before he leaves High School.

This is Fletcher Long reporting for Kentucky Prep Gridiron reminding you to PLAY THROUGH THE WHISTLE…that whistle might be telling you a Freight Train is coming!