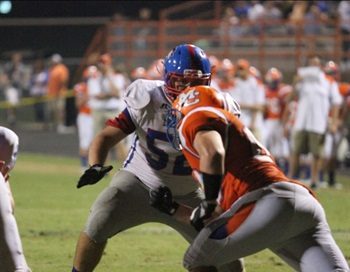 One of the top prospects in Kentucky is a QB named Kolbe Langhi. Kolbe is a 6’6″ 220 pound missile launcher within easy striking distance of 10,000 career passing yards. Kolbe gets a lot of ink and is presently listed at No. 13 on 247Spots.com‘s list of top 2018 Kentucky targets. Everyone loves a quarterback and as the summer progress on into the Fall, it would be a sure bet Kolbe with get some love on this site too. I mean, what the Hell, everyone else is jumping on that bandwagon, why not Kentucky Prep Gridiron?

I like creating bandwagons on which there are few passengers at the present time. When I first alerted analysts, subscribers, and enthusiasts to Skyler Mayes, for instance, he was an unknown and now he is being courted and offered all over the place. The same can be said about QB, Jacob Buie, Guard, Jaren Rogers, and many others I have featured on this site. Jumping on the train for the Rondale Moore, Tahj Rice, and Jairus Brents, along with Kolbe Langhi, is easy. Recognizing they are top prospects has already been done by sites like Rivals and 247Sports.com. It’s not that I am not going to feature them, but I feel obligated, somewhat, to find the players; not just heave plaudits at players Rivals and 247Sports have already found.

Well, let me be the first to introduce a player who I believe may be the best Offensive Guard in Kentucky’s 2019 Class, even though Christian County HS currently has him playing Offensive Tackle. Jude Langhi, who starts along Christian County High School’s offensive front, measures 6’3″ and weighs 290 pounds. Jude benches 315 pounds and squats nearly 500 pounds. Langhi has plenty of explosion with a Power Clean of 250 pounds. Another notable statistic which demonstrates Langhi’s hip explosion is his 102 inch broad jump (8 and 1/2 feet). I told you the foregoing to tell you the 290 pound, road grader of a drive blocking machine, runs the 40 yard dash in 5.3 seconds and these other numbers (power clean, broad jump, back squat) corroborate the 40 time, which at 290 pounds, is a very fast time. At last year’s NFL combine Guard, Pat Elflein, from The Ohio State University, was measure at Jude’s height (6’3′), was only thirteen pounds heavier (303), ran a slower 40 at 5.32 (Jude runs 5.3), and broad jumped 3 fewer inches at 99, as opposed to Jude Langhi’s 102. Am I saying Pat Elflein isn’t any better of an athlete and Offensive Guard prospect than Jude Langhi? Maybe, can’t say for sure…but the numbers, when compared, say something or else why do they have the prospects perform these tasks to determine whether they should or shouldn’t draft and/or sign them to play professionally?

Let me tell you the following, Kentucky Prep Gridiron would like to construct the Jude Langhi bandwagon. This is a wagon Christian County’s rushing offense plans to ride toward a 5A State Championship this season together with the myriad other weapons at Coach Lovelace’s disposal. We would recommend you schools perpetually searching for up front protection and help in the run game sit up now and take notice. You might even see if you can get in touch with Jude, you can probably ask Kolbe for his number. I would get on board with this kid now, because when this prospect gets seen and evaluated, this is one wagon which will launch like a rocket! This is Fletcher Long reporting for Kentucky Prep Gridiron reminding you to…PLAY THROUGH THE WHISTLE!