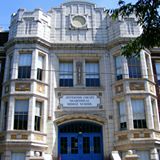 I have waxed eloquently before about the eye of Kentucky Future Stars’ Director Ricco Hughes when it comes to football talent. It is the keenest eye in Kentucky in my opinion, and I believe to be in possession of a pretty keen eye myself. Simply put, I haven’t seen a Future Star selected by Hughes yet who didn’t round into a present star. The same can be said about Tennessee’s director, Josh Jones, but, in any event, if these guys miss, I have missed it. So you can imagine how quickly I got ready to feature a player when, out of the blue, and without any solicitation from me, I got a text message from Director Hughes which read gotta a kid you need to write about named Vinny Anthony, bad dude!!! I am not used to Ricco so vigorously advocating a prospect like that. Yeah, I have gotten a few the kid’s a player, or he’s pretty good, but bad dude!!!? Is he really worth three exclamations?

So I look the kid up to see what there was about him which would make a professional sports agent use three exclamation marks when describing his badness. I watched his film on Hudl to see what could cause all the fuss. I am linking his film here, so you can see for yourself (Vinny Anthony highlights). After watching the film, I think I would have used four exclamations.

Here is what jumped out at me…Vinny is a player with really good size and the speed to gain separation once he hits the defensive back four. While

I am sure Vinny is auditioning for the Tennessee-Kentucky Future Stars Classic, I don’t expect to see him this week-end in Bowling Green. There is no way he doesn’t make the Kentucky Future Stars team absent his just sitting out this year. I would also expect Vinny to get into the varsity lineup at Class 6A Louisville Male, where he is going, next year. I know it isn’t done often but Vinny, as a freshman, is the rare instance where I expect he will be awarded an H at the end of the season for his lettermen’s jacket.

I have not the least bit of hesitance in saying Vinny Anthony is the best WR in the Kentucky 2022 class. I think Ricco might have shorted him, he should have given him four to five exclamations. He is truly one bad man. This is Fletcher Long reporting for KPGFootball reminding you to PLAY THROUGH THE WHISTLE!

Experience the Zija difference…because it’s what’s inside of you that counts!