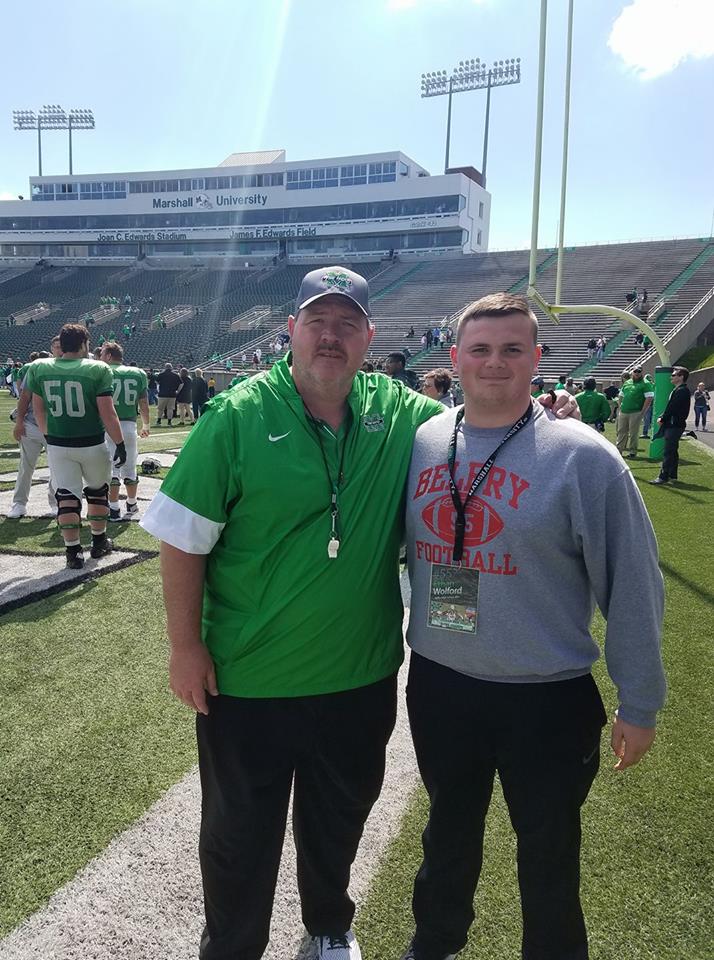 It took literally no time for HerdHaven.com’s Dave Lester, the moderator of the 247Sports.com site which principally covers Marshall University football, to identify Belfry’s, Ethan Wolford, as one of The Thundering Herd’s most sought after line targets in the class of 2020. From that, one might suspect O-line coach Greg Adkins and the rest of the The Thundering Herd were right impressed with Ethan Wolford. Well, just in case Marshall’s football program is the least concerned about whether the admiration flows both ways, let me assure you it certainly does. KPGFootball got the opportunity to interview Ethan Wolford immediately post visit and this is what he told us.

KPGFootball…Ethan, what did you think of your visit to Marshall University?

Ethan…It really blew me away with how warm and welcoming every one was. From the players to the coaches, everyone both with the program and on the campus were very gracious. Marshall University has always been a dream school for me coming from the mountains of Kentucky in such proximity to West Virginia. It was everything I hoped it would be.

Ethan…I really felt like I hit it off well with Coach Adkins. I can see that he is tough but really cares about how his players develop. I also appreciated the players and how they interacted with each other and with him. I can see why Coach Adkins has been so successful everywhere he’s been. With Coach Adkins, he seemed more like a father figure to his players than a coach. When one of his players messed up, he didn’t just flip out. Coach Adkins would go over to the player, put his arm around his neck, and explained what he did wrong. I was really impressed by that. It reminded me of how I have been coached at Belfry High School.

KPGFootball…What about the visit to Marshall stood apart from other visits?

Ethan…This isn’t a knock on anywhere else I have been. I am a product of the mountains, where I grew up, and Marshall has more of a mountain feel to it. If you aren’t from the mountains that probably makes no sense to you. All of the visits I have made have been special; but this one stands out to me.

KPGFootball…Could you see yourself playing there?

Ethan…Definitely, I have some more visits set up, and am excited about the process, but had Marshall offered this weekend I could have seen myself ending it on the spot. I could definitely see myself playing there and proudly.

KPGFootball…What did you think of the players?

Ethan…Man, they are just regular guys like me. It was like I was hanging out with my friends. They told me they really like Kentucky players there at Marshall, particularly along the offensive line. I can see why that is. It’s so easy for us to fit into the environment. I felt like I was back home. They took 5 Kentuckians in the 2018 class so they recruit Kentucky often and well.

Ethan Wolford, who we have consistently identified as Kentucky’s top center prospect in his class, at the least, and maybe the best center in Kentucky regardless of class, certainly looks like, provided the cards fall just right, he might make Huntington, West Virginia his college home. It is a good thing that, should that occur, it is so close to and similar to his home back in Belfry, Kentucky. If there are any colleges out there thinking of getting the talented 6-2, 270 pound interior offensive lineman on campus for a look-see, I wouldn’t wait around too long to do it. Things are getting hot around Belfry, Kentucky and most of the heat seems to be around Ethan Wolford.