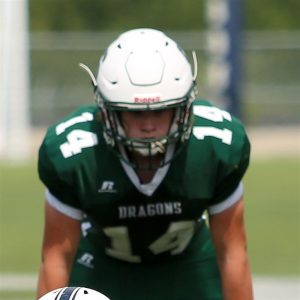 News and Notes from the Gridiron segment from yesterday. Some people are worth a little redundancy, and this LB prospect in Kentucky’s 2022 class is drawing favorable comparisons to Austin Gough from Owensboro, who many considered the class of 2021’s linebackers in the commonwealth. Brother, that is high praise right there. Darrah had an unbelievable combine in Louisville this past weekend which many might well consider Beowulfian. The 6-0, 185 pound linebacker/running back, who is 14 years old, ran the 40 in 4.84 and shuttled (5-10-5) 4.63. Darragh has just started lifting to get ready for high school football where he is benching 185, squatting 275, pulling 315 (deadlift), and power cleaning 185 (explosive). He’s only been lifting since February. What those number will be by the Future Stars’ Classic in July is anybody’s guess but I am guessing pretty scary.

We had an opportunity to interview the linebacker coach who will be on the Kentucky Future Stars’, 8th grade staff, as the linebacker coach. He had lots to say about Will Darragh. He stuck out. Darragh had the top numbers at the combine for a linebacker, he’s a larger version of Ben Vaughn from E-Town. Reminds me of the Gough kid from last year, excellently compares. His numbers for an 8th grader his size were really phenomenal. I can not stress this enough…he was the class of the combine at his position, number one. Austin Gough, many of you may recall, though a linebacker, got moved to RB in the 4th quarter of last year’s game and came away leading Kentucky to victory and winning the offensive MVP award. It is easy to imagine Darragh having a similar impact on this year’s Classic. 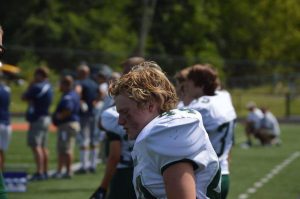 Probably one of the funniest things the coach told us about Darragh, which is why it is in the title to this feature, is that Will is on, what they called in college, the airport team. He is a young player with excellent frame. The kind of kid you definitely want getting off the plane and on the bus to ride to the game. He passes the rather significant eye-ball test. As coach told us…Darragh, visually, has the goods. Darragh, who played for his dad, Mark, at South Oldham Middle School has the goods more than just visually.

During his 8th grade year, Darragh led the Dragons to a 9-2 record and a Mid-Bluegrass Conference Championship. Darragh rushed for 801 yards, averaging 7.92 yards every time it was handed to him with 13 rushing TDs. Darragh also logged 9 receptions, 3 of which for TDs, for another 175 yards receiving. Darragh averaged 19.44 yards per reception. It hurt him playing for his Dad and his Dad wanting to avoid the appearance of favoring his son. If Darragh had played for me at HMS last year, I have no doubt he would have racked up nearly 1600 yards and 2,000 combined yards playing the same 11 games he played for South Oldham. I would have found a way to get him the ball nearly every play. He’s just that good.

Darragh began the season at DE and tallied 15 tackles from that slot in the first five games with teams waiting to see on which side of the formation he aligned and then running the other way. Wisely, Coach Darragh moved his son, Will, to MLB in game six. Darragh had 47 tackles in the next six games after being deployed in the middle of the field. Darragh tallied 10 stops in the conference championship game. Will was selected to both the Floss32 South Oldham Classic All-Tournament Team and the Mid-Bluegrass All-Conference Team. Asking his position coach whether he saw any way Will Darragh isn’t on this year’s Team Kentucky Future Stars, like he was last year, his response was, the only way he doesn’t make this team is if he were to suddenly move out of Kentucky.

Will Darragh appears to be the class of Kentucky’s 2022 class at either fullback or linebacker, just like his brunette counter-part from Owensboro in the 2020 edition. Of course Gough led OHS (Class 5A) in tackles his freshman season and made the AFI-KPG Freshman All-State Football team. Is Will Darragh set up for that kind of freshman season playing varsity football at South Oldham High School? According to the man who will coach linebackers for Team Kentucky this summer…no doubt about it.