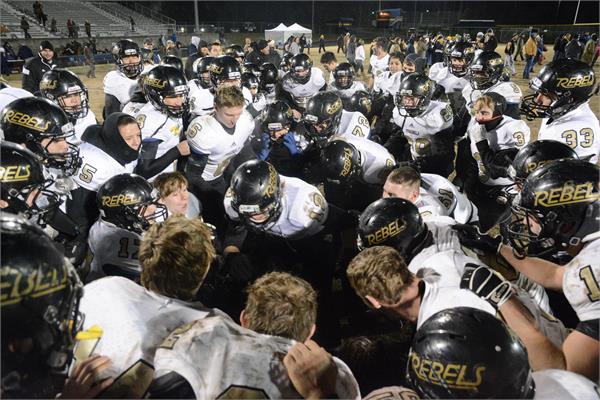 I would like to begin by thanking Athletic’s Director, Glenn Spalding, @EHSPanthers19, for accommodating Kentucky Prep Gridiron’s eleventh hour request for Media passes for three for tonight’s Semi-final contest. I am taking two recently adorned Aspirations Fitness Institutions All-State players in William Long, Class of 2021, and Jay Bland (a.k.a. Javier), Class of 2020 with me the two of whom Director Spalding and E-town High School are, likewise, kindly accommodating. The three of us are really excited. I thought it would be fun to take a break away from expounding on our All-State Freshman and Sophomore Selections and break down the game tonight and predict a winner in this contest between two 12-1, Class 3A powers. Here we go…

Probably best to start with tonight’s visitor, Boyle County Rebels, who enter this contest having lost only one game on the season to Danville High School. Now the Class 2A, District 7, Admirals from Danville High School are playing a Semi-State game this evening too, against Glasgow, and are 12-0 on the season. Danville, like Mayfield and CAL (who square off tonight as well). are all Class 2A teams whom transcend their Classification. If they show up on your schedule, you better be ready to fight, I don’t care what the team’s Classification is. Now Danville survived its encounter with Boyle on August 31, 2017 in a game played at Danville High School 10-7. Boyle hasn’t lost since and has beaten North Hardin, who may have struggled but has a much larger enrollment than Boyle, if that kind of thing interests you( North Hardin is Class 6A). Boyle County has also trounced Lexington Catholic twice in spite of Lexington Catholic being quarterbacked by the splendid All-Stater, Beau Allen. Boyle has scored 630 points in 13 games or nearly 48 and a half points per game while surrendering a bit over 13. The Rebels have gained over 280 yards per game on the ground being led by Tanner Crawford (1811 yards), Sophomore All-Stater Landon Bartleson (962 yards) and Blake Biggs (253 yards) who have gained 3,026 of those yards between the three or nearly 83% of the team’s 3,649 yards rushing. The Rebels are effective through the air as Sophomore All-Stater, Reed Lanter, has thrown for nearly 2,300 yards passing for 22 aerial scores. The defense has allowed a little over 67 yards of rushing, on average, per game and slightly over 141 passing yards, per contest.  If there is a susceptibility, it appears to be through the air.

As for the home team, the Panthers from Elizabethtown, Kentucky, have, like Boyle, finished 12-1 and absolutely pounded a Caldwell County Team, in the State Quarters, 52-6. Caldwell’s team entered the contest 10-2 on the year, before limping home 10-3. Oh well, what’s the old saying? In like a lion…out like a lamb! E-town’s only loss on the year was to CAL in Louisville, 24-9, way back on September 8. E-Town has scored an even 43 points a ballgame, while surrendering only 9.23 and some change. Though the Panthers run the ball well, their 2,666 yards for the season pales in comparison to Boyle’s 3,649. Still, the Panthers average a little over 205 yards rushing per contest while permitting only a fraction south of 102 through the air. Boyle County’s Rebels, as we above stated, have allowed 141 passing yards per contest which may seem a weakness defensively, if you will. The only problem with that is Boyle has beaten a Beau Allen Quarterbacked team twice. Playing Beau Allen twice in one season tends to skewer a defense’s numbers a bit. Boyle’s perceived weakness, defending the forward pass, is something E-Town, and its starting quarter-back, Jay Durbin, can do effectively. Durbin only averaged 107 passing yards per game (1,391 on the year) but he has thrown for 20 aerial TDs against only 3 picks for a TD:Interception ration of almost 7:1. Durbin won’t throw it tonight anywhere near as well as a Beau Allen; and Boyle beat Allen’s Lexington Catholic team, this season, twice by a combined score of 105-32. While Jay Durbin ain’t no Beau Allen, Lexington Catholic ain’t no E-Town either.

This is going to be one of the most compelling games played this evening between two of the best football teams, programs, and coaching staffs the Commonwealth of Kentucky can boast. I really wouldn’t be surprised with any result and am so excited I get to be in E-Town to witness it and share it with both Jay Bland and my son, William. If pressed to pick a winner, showing no preference for the Athletic Department kind enough to host me, I have to pick the Rebels from Boyle County, whom I believe will win it all this year in Class 3A.