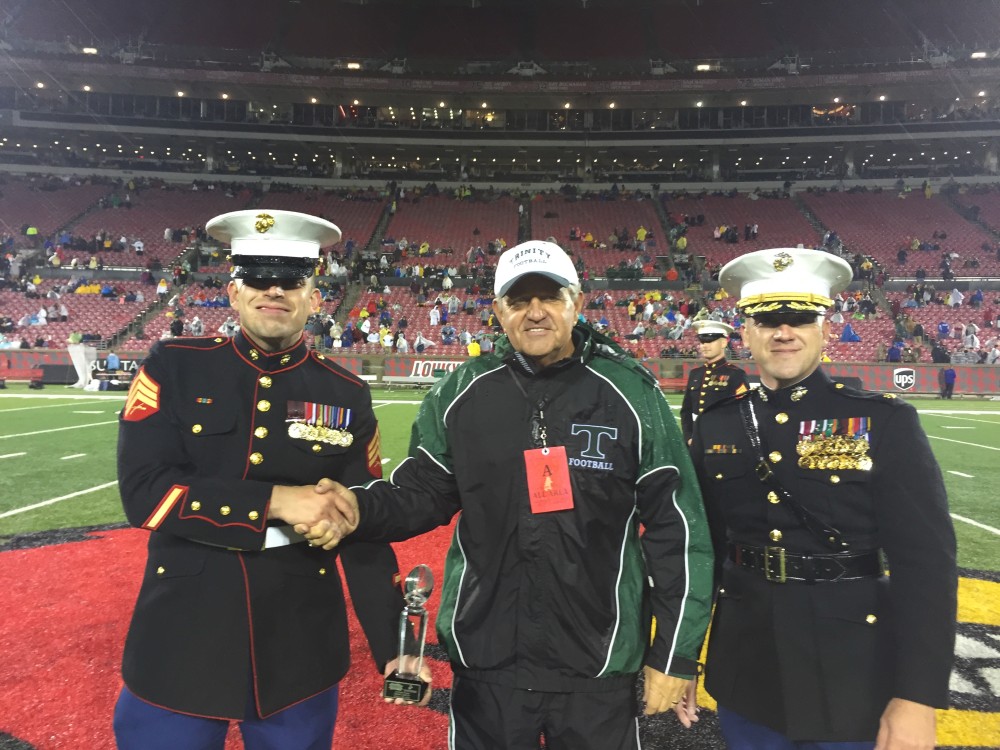 According to Wikipedia, a shamrock is a young sprig of clover used as a symbol of Ireland and, particularly, Saint Patrick, patron saint of Ireland, as a metaphor of the Holy Trinity. The Shamrock is particularly associated with the concept of being lucky. I have heard an Irish blessing, the origin of which I have no idea, say as much. The blessing goes as follows: May your blessings outnumber/ The shamrocks that grow,/ And may trouble avoid you/ Wherever you go.

Perhaps Trinity High School has been so blessed it would appear, particularly, in the sport of football. The college preparatory high school located in St. Matthews, Kentucky, a city within the Metropolitan area of Louisville, is a Roman Catholic school incorporated within

the Catholic tradition of teaching. It is a Blue Ribbon School of Excellence academically and accredited by the Southern Association of Colleges and Schools. All of that notwithstanding, it is still largely known around the Commonwealth for its prowess on the gridiron.

Trinity’s primary rival, another Catholic school, is St. Xavier. On the first Friday in October of each year the two teams renew their annual, regular season, rivalry at the University of Louisville’s Papa John’s Cardinal Stadium in the most attended regular-season high school football game in the country. The game draws in excess of 35,000 fans regularly. St. Xavier and Trinity have met for the State Championship in Kentucky’s largest classification 5 times previously with Trinity having a 3-2 record in those encounters. Louisville Trinity was named the 2011 National Champions by both Rivals.com and Sports Illustrated.

People knowledgeable in Kentucky athletic circles consider Louisville Trinity the absolute pinnacle of Kentucky High School football. Trinity’s football program has produced 4 prior Mr. Footballs (Keith Calvin,1973; Jeff Brohm, 1989; Jeff’s brother, Brian Brohm, 2003; and James Quick, 2012) with many around the Commonwealth wondering whether Mr. Rondale Moore, committed to the University of Texas, might not give Trinity High School its 5th recipient at the end of this year.

In conclusion, for what I believe to be Kentucky Prep Gridiron’s 100th article, it is fitting we should choose Trinity High School in Louisville, Kentucky for its topic. Louisville Trinity High School has scaled unbelievable heights and won at an incredible pace since its coming on the scene in the Commonwealth of Kentucky. Frankly, it is hard to imagine a program meeting with more success. What is scary for those in the largest Classification in the Commonwealth, is that Trinity High School is hardly finished from this reporter’s perspective. You know what ballers? None of this appears to have anything to do with luck. It is just plain, old-fashioned, hard work coupled together with the fact the Shamrocks never take off a single play. Every time, every down, at Louisville Trinity High School, the Shamrocks are scaling the mountain the only time-tested way in existence…the Shamrocks are PLAYING THROUGH THE WHISTLE!